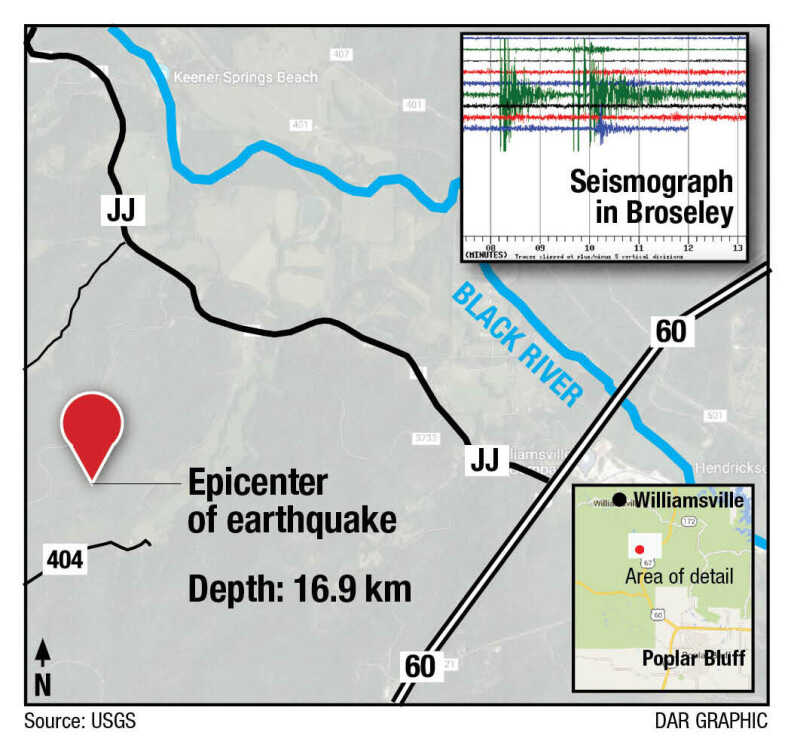 WILLIAMSVILLE — Residents of Southeast Missouri were shaken Wednesday evening when a magnitude 4.0 earthquake struck the region.

The quake occurred at 8:53 p.m. and was centered five miles south-southeast of Williamsville, according to data from the U.S. Geological Survey.

USGS data shows the quake as the largest to strike Missouri since a magnitude 3.9 hit the Bertrand area east of Sikeston in February 2012. Since that quake, three others measuring 3.6 have occurred in the region.

Local officials have not heard of any damage reports, but are encouraging those with damage to contact them.

“Right now we’re just looking for any reports of damage. If anyone has any, call the police or sheriff’s department,” said Butler County EMA Director Robbie Myers. “We will tonight, and especially tomorrow, be looking even harder.”

If anyone has damage, Myers said, “we need to become aware of that, but at this point, we don’t know of any.”

The USGS initially reported the earthquake as a magnitude 3.7 but later upgraded it to a 4.0.

The quake, according to several initial reports, was felt as far away as Rolla, West Plains and St. Charles.

Close to the epicenter, the chief of police and mayor of Williamsville said there were no official damage reports as of 10 p.m. Wednesday.

“We all felt it here,” said Carter County EMA Director Curt Majors. “There’s no damage that we are aware of, but we have had several security alarm calls.”

Stoddard County EMA Director Andrew Bohnert said most reports he had heard of were from the Dexter area and southward.

Ripley County EMA Director Brian Byrd reported the quake “shook hard” and was felt in Doniphan, Gatewood and as far away as Myrtle, however no damage reported had been received.

Many residents across Butler County and the surrounding area reported hearing a loud boom, with the ground shaking for several seconds. Some residents reported items being shaken off of shelving and walls.