Area marks 10 years since weather event of the decade, the 2009 ice storm

The National Weather Service calls it the weather event of the decade, but for local residents, the 2009 ice storm probably still seems even more significant.

The full brunt of that weather front left over 1 million people without power across nine states, including entire communities, like Dexter and Corning. The area saw as much as 2 inches of “catastrophic” icing and another 2-10 feet of snow accumulation between Jan. 26-28, 2009.

“This one humbled us. We walked out of this one on our knees,” Stan Estes, then-manager of Ozark Boarder Electric Cooperative, said at the time, after OBEC suffered $29 million in damage.

Preliminary damage estimates were in the neighborhood of one-half billion dollars in the Paducah National Weather Service forecast area, the NWS reports.

By late February 2009, Poplar Bluff alone was awarding a $1.4 million contract to remove what would end up being nearly 100,000 cubic yards of downed limbs and trees just from within the city limits. The amount of debris was equal to about 39,000 full size pickup truck loads.

It took two years or more for some electric utility companies to fully recover, and area officials say other impacts from the disaster are still being felt.

Butler County commissioners believe log jams in the Black River south of Poplar Bluff were made much worse by the amount of debris that fell into the waterway or later washed into the river because of flooding.

They blame log jams along a 35-mile section of the river for flooding in recent years of Highway 53 between Poplar Bluff and Qulin, as well as surrounding farmland. The commission continues to work on this problem with the U.S. Army Corps of Engineers and other entities that have to be consulted, according to presiding commissioner Vince Lampe, who began discussions with the Corps as early as 2016.

Throughout the response to what area county officials described at the time as the worst disaster in memory, 61 shelters were opened for residents in Missouri and 80,000 meals served.

Some families, like Shelly Reagan and her children in Pollard, Arkansas, were without electricity in their homes for nearly a month.

“This is the most widespread disaster we’ve ever had,” Travis Boyd, then-Clay County coordinator for the Office of Emergency Services, said later that year. “We didn’t have a single outlet burning in the county by the second day.”

More than 65,000 electric poles throughout the area were taken down by the ice.

The strain on emergency services, first responders and utility workers was extreme.

“The first two days were the worst,” said Brien Fugate, then-market general manager for Rural Metro Ambulance Service. “We average about 20 runs a day and we went to almost 40 runs a day, not counting the 15 to 20 welfare checks we did each day.”

One ambulance crew hiked a mile, crawling through fallen trees and crossing downed power lines to reach a patient.

“I wasn’t surprised our community came together to do this. It’s just that kind of people who live here,” Carolyn Goode, then a school cook said later that year. “People all over town pitched in and worked as equals.”

Other communities, like the Dudley Special Road District in Stoddard County, didn’t wait for the federal emergency declaration and outside help. They cleared 70 miles of pavement following the ice storm.

“We used our own tractors. We got these roads open where people could travel. That was our job,” then-board member Bob Hardin said.

Parts of Stoddard County were without electricity for 23 days. Power outages also led to fuel shortages, because of the number of gas stations shut down.

“It was like a month-long nightmare,” said Frank Sifford, then-Stoddard County associate commissioner. “We had miles and miles of electric lines down. The ice storm was really widespread.”

About 90 percent of Ripley County was without power immediately following the storm.

“During the emergency, you could really see the community pulling together,” said Connie Teslow, then-Doniphan city clerk. “At meetings, we said how proud we were not just of the people whose job it is to provide services, but of the ordinary people who pitched in to help their neighbors.”

Wayne and Carter counties, like others, reported houses, metal buildings and other structures that collapsed under the weight of snow and ice.

“We care about our neighbors. We need each other at a time like that. That’s the way it goes, or at least it should,” an official with the City of Grandin said. 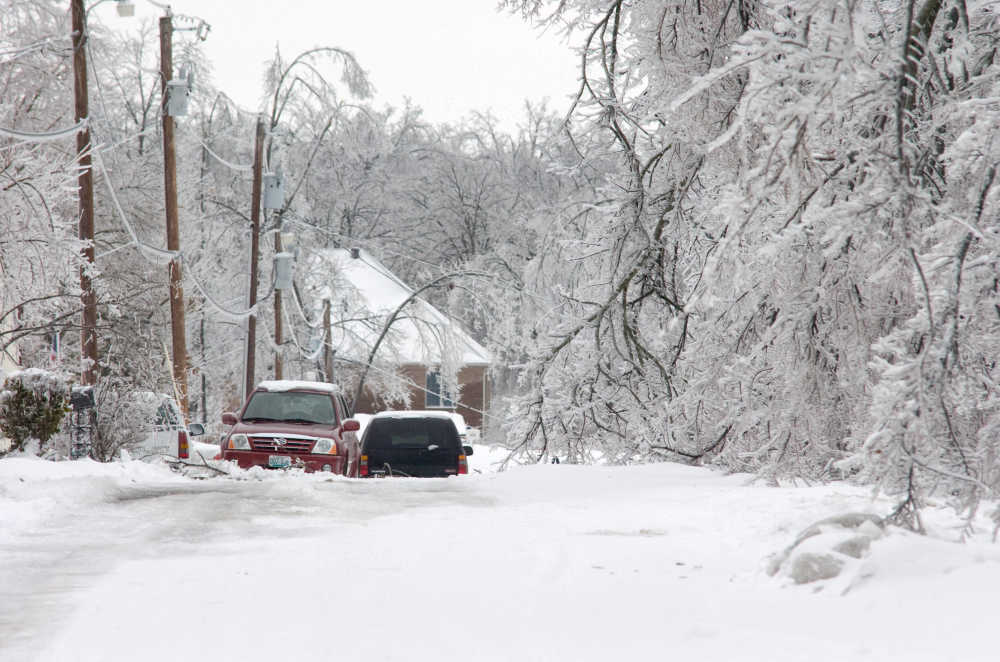