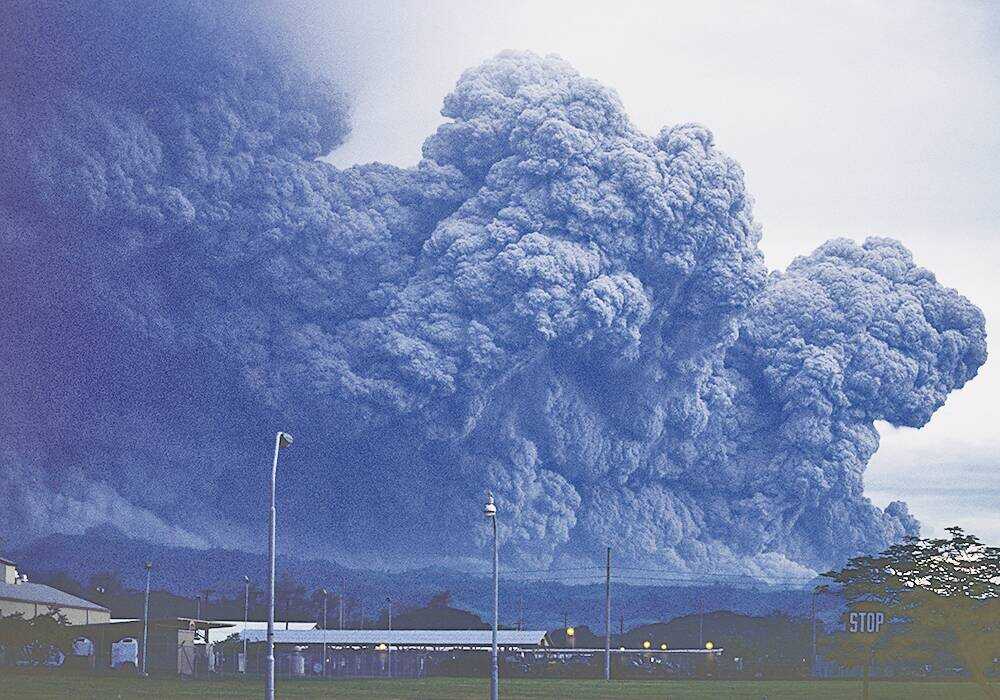 Mount Pinatubo in the Philippines erupts in June 1991.

June 12 is a significant day for myself and a few thousand other American service members who were stationed in the Philippines three decades ago.

Today is the 30th anniversary of the first eruption of the Mount Pinatubo volcano in several hundred years.

That eruption essentially cleared the old mountain’s throat and paved the way for its ultimate show, which happened three days later and ended up being the second-largest volcanic eruption of the entire 20th century.

It all started nearly a year before, when a magnitude 7.8 earthquake hit the area one evening. If you’re unfamiliar with earthquakes, that was a big one.

My wife and I were walking to the video rental store (remember those?) when it hit, and I lost my balance and fell to my knees. I distinctly remember all the buildings around me shaking to the point where I could not focus on them.

More than 3,000 people died that day. The experience, and the aftermath while covering the death and destruction as an Air Force photographer, is ingrained into my memory.

Fast forward to the next spring, and my wife and I again were out walking when we noticed white steam coming from a nearby mountain, and it smelled like sulfur.

Within days, we learned the mountain was an ancient volcano that was coming back to life.

Pretty soon, she was on her way back to the states, and I was tasked with documenting the volcano with a crew of U.S. Geological Survey scientists.

I flew daily with those guys, setting up seismometers and other instruments, and collecting gas readings from a device mounted to the landing strut on the chopper.

Setting up a seismometer about a mile and a half from the summit in early June 1991, a USGS scientist said something I’ll never forget.

He asked our helicopter pilot how long it would take to get the UH-1 Huey fired up and off the ground, and the pilot’s response was something like “two minutes if we go by the book.”

The scientist looked him in the eye and said bluntly, “If it blows, we’ll all be dead in less than 30 seconds.”

That kind of thing strikes a chord when you’re in your early 20s and you’re halfway around the world from your family.

By that time, most of the Clark Air Base population had been evacuated back to the states, but I remained as part of a security and media detail.

A few days later, on June 12, we were awakened by the sound of air raid sirens, and rushing out of the building, the sky was dominated by a fast-rising mushroom cloud of ash. Within minutes, it was high overhead and the sky began to turn dark.

It was scary for sure, but little did we know the worst was yet to come.

Our base was about 8.5 miles from the volcano, which was a little too close for comfort, given what the USGS guys were saying about hot ash and gas clouds killing everything for miles.

Several times each day, and night, we had to evacuate to the far side of the base to put some distance between us and those gas clouds, but on June 15, things took a much worse turn.

That morning, just as Typhoon Yunya hit the area, the mountain completely blew. All we could see was ash clouds and purple lightning, and then daylight quickly turned to eerie black night as ash rained down on our heads. That ash cloud rose 28 miles into the atmosphere.

We evacuated about 25 miles away to an agricultural college, where we spent two days waiting for things to calm down. We slept in cars and open fields to avoid being crushed by collapsing buildings, a product of the seemingly non-stop, violent earthquakes as the mountain collapsed.

Upon our return to the base, the landscape was very eerie, with a foot of light gray ash covering everything. Trees were snapped in two, and many buildings were flattened. It was almost unrecognizable, like standing on the moon. Later, we were told many of the valleys near the mountain were filled almost 700 feet deep with ash and debris, and the eruption ended up being 10 times the size of the 1980 Mount St. Helens event.

We escaped injury, but many others didn’t. Almost 900 people died during that eruption and in the following months as heavy rains caused massive mudslides.

I had nightmares for a long time afterward, but they eventually subsided. It was a terrifying experience overall, but I can honestly say it made me stronger.

Today, the air base is gone and Mount Pinatubo apparently is a popular recreation area with a crater lake a mile and a half wide.

At the time, I said I’d never go back, but today, I would love to see it again … as long as it stays quiet.

Paul Davis is assistant editor of the Daily American Republic. He can be reached at pdavis.dar@gmail.com.

More from this blogger · Paul Davis
Respond to this blog