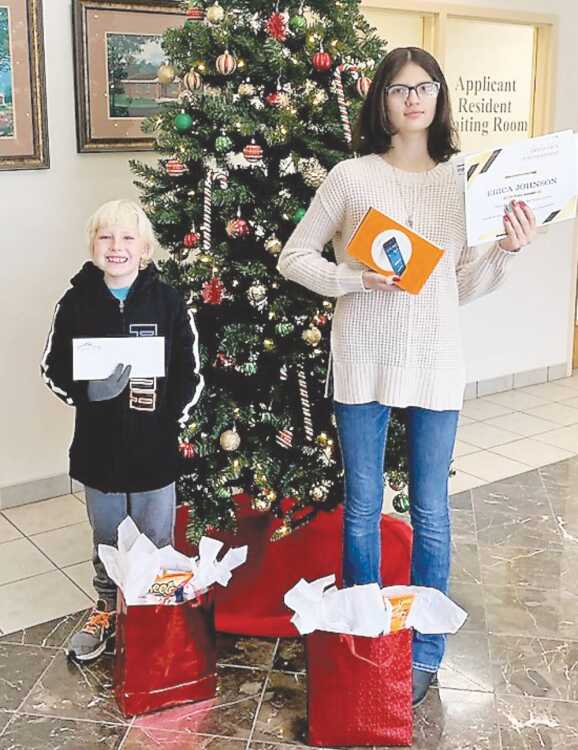 Logan Green and Erica Johnson have been named as the first place, local winners of the second annual “What Home Means to Me” poster contest from the Poplar Bluff Housing Authority.

“Green became very excited when he realized his poster is the cover of the 2022 housing calendar,” office manager Tammy Harper said.

Green’s blue house surrounded by green fields and trees is not his only first place win. He also participated in the 2021 poster contest and won first place in his age division.

Green is the son of Tonya Snedeker and is in second grade at Lake Road Elementary.

Johnson is in the ninth grade at Poplar Bluff Junior High School. She is the niece of Larry Logan and Rebecca Lanham.

The drawing of her home was surrounded on three sides with red hearts, a family tree, flowers, a smiling yellow sun and smiling family members.

Green and Johnson were among the first to see the new housing calendar. Johnson’s poster is included on the inside page of the calendar.

Green received a gift card from Academy Sports + Outdoors and Johnson was awarded a touch screen tablet. Both received gift bags filled with their favorite treats.

Harper said the contest is a part of National Association of Housing and Redevelopment Officials’ Housing America campaign, a poster contest held each year for children living in affordable housing owned or administered by NAHRO member agencies. Posters reflect the national theme “What Home Means to Me.” The contest is a collaborative effort of NAHRO’s local and state chapters, regional chapters and national NAHRO.