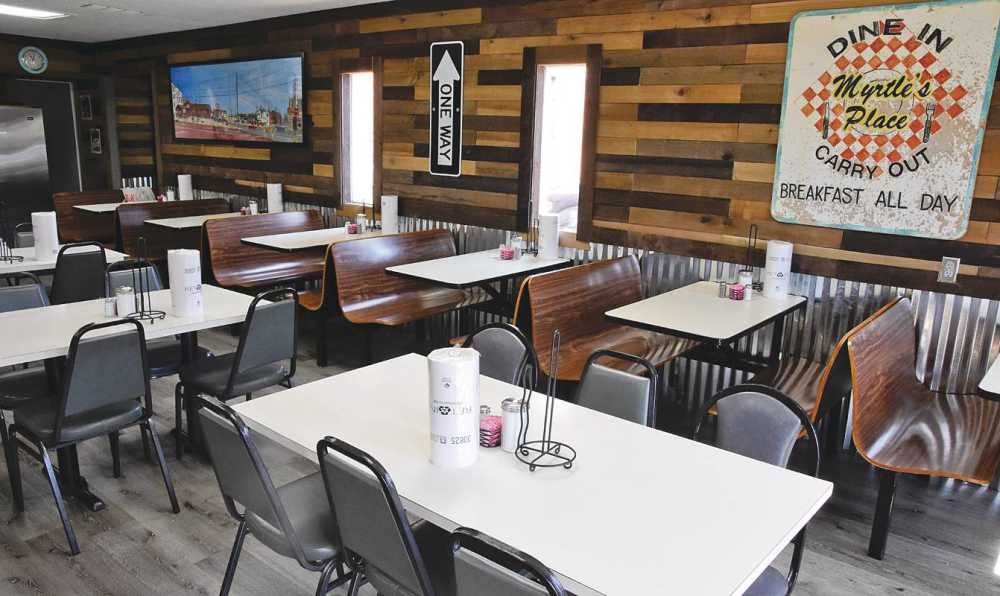 The staff at Myrtle's Place and Back Alley Barbecue in Poplar Bluff took advantage of the time their dining room was closed to remodel the restaurant.
DAR/Paul Davis
Order this photo

Two restaurants in downtown Poplar Bluff have made the decision to go smoke-free before their dining rooms reopen on Monday.

“The biggest complaint I get all the time is the smoke. This decision needed to be made long ago,” said Leanna Alexander, whose mother, Debbie Sliger, has owned Myrtle’s Place & Back Alley Barbecue since 1996.

During the dining room closure, the staff at Myrtle’s took the opportunity to remodel, and with the changes made the decision to eliminate smoking inside the building.

“Being closed down, we had the ability and time to remodel, and when you do all this work, you look at it and think, this is the time (to go smoke-free),” Alexander said.

A block away, the owners at Haffy’s Sports Bar & Grill, Larry and Lisa Hafford, also have decided to not allow smoking in their restaurant any longer.

“It’s something we have been thinking about ever since we took over,”said Lisa Hafford, who has owned Haffy’s for “about two and a half years.”

“As we’re preparing to re-open after everything with COVID-19, we just thought with everybody having to wear face masks when they go in public that this was probably a good time to go ahead and make that transition,” Hafford explained.

The decision at both restaurants wasn’t an easy one to make, as each has regular customers who like to smoke.

“It was a big decision and a big stress on mom,” Alexander said, “but if we don’t get new things and try new stuff, our business will die down too.”

Hafford said her business has “some really good customers who are smokers, so it’s a very hard decision to make, and we’ve really struggled with it.”

Each hopes their longtime customers who smoke will continue to support them, and each is working to accommodate them as well as they can.

“We do have our courtyard across the street, and we are going to put some pots outside for them to put their cigarette butts in,” Hafford noted. “They can walk outside for a minute for a quick smoke break and come back in.”

At Myrtle’s, benches will be placed outside for smokers.

“Me and Lisa are really excited down here,” said Alexander. “I’m super excited about the change.”

Both restaurants also are preparing to re-open their dining rooms on Monday after Gov. Mike Parson initiated phase 1 of his Show-Me Strong Recovery program.

“This is something we’ve never done, so we don’t know how to plan for it, but it’s kind of become our motto around here - we’re gonna follow the requirements they’ve given us, and we’re going to do the best we can,” Alexander said.

“We’re going to wear masks, and we’re going to accommodate so everyone can sit six feet apart,” Alexander said. “We’re not going to move tables, but we will sit somebody at every other booth, and if they’re too close, we’ll ask them to move to abide by the guideline we have to follow right now.”

At Haffy’s, “we’re repositioning our tables and measuring them to make sure they’re six feet apart,” said Hafford. “We’re going to make sure we supply our employees with masks, and they already have gloves.”

More to Explore
Comments
View 2 comments
Note: The nature of the Internet makes it impractical for our staff to review every comment. Please note that those who post comments on this website may do so using a screen name, which may or may not reflect a website user's actual name. Readers should be careful not to assign comments to real people who may have names similar to screen names. Refrain from obscenity in your comments, and to keep discussions civil, don't say anything in a way your grandmother would be ashamed to read.
Respond to this story