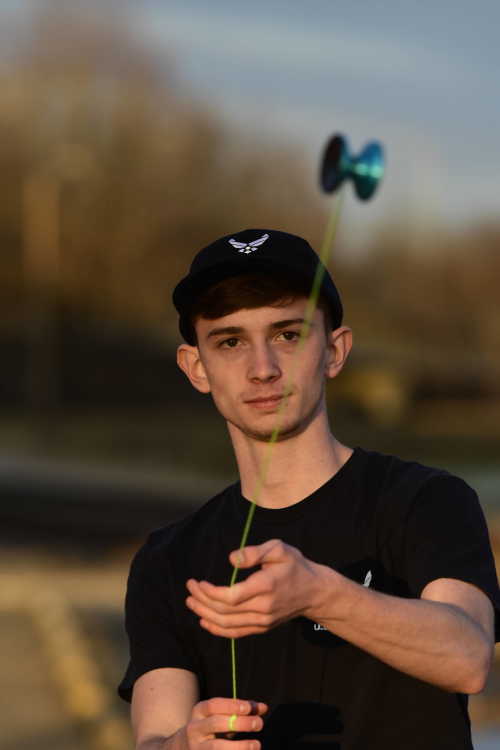 Wyatt Russom, 19, first picked up the yo-yo in fifth grade, after a performance at school that used yo-yos to teach about persistence and the importance of continuing to try something.
DAR/Paul Davis

In fifth grade, Wyatt Russom convinced his mother to get him a yo-yo after a presentation at school turned into a hobby through high school.

The presentation, called the NED Program, used yo-yos to tell a story of encouraging students to practice persistence and keep trying after they make mistakes. Russom said it was a comedic show and at the end, the students received forms to buy NED branded yo-yos.

Russom returned home from school with the form to eagerly convince his mom, Gina Russom, to buy him a yo-yo and instructional DVD. 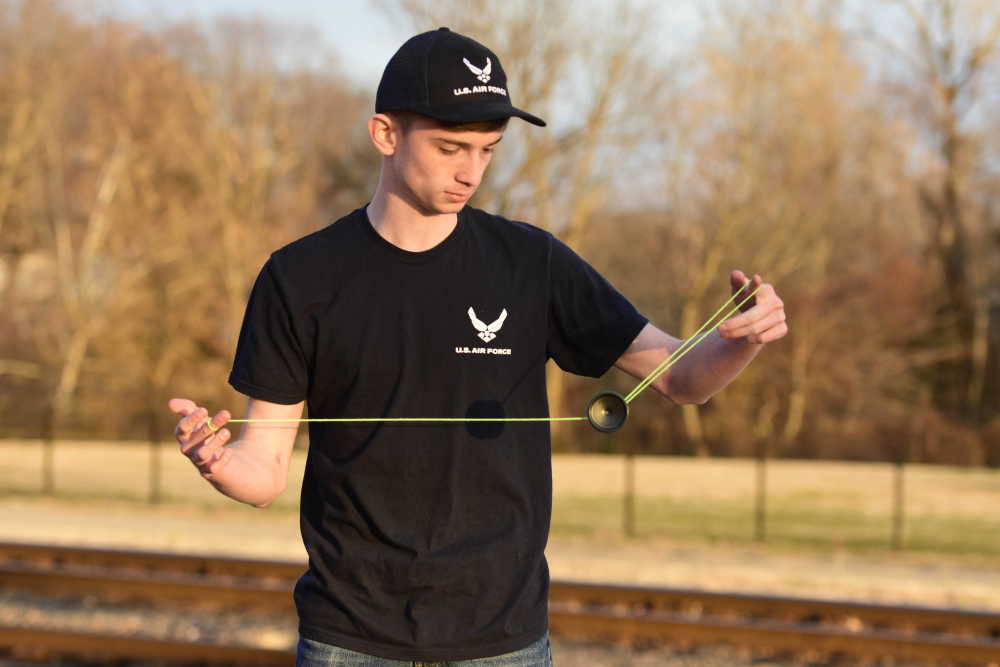 When it came in, he set to work with it and continued to practice for years.

Today, he has mastered many complex and difficult tricks, that always seem to wow his audiences.

“I annoyed my parents more than anything because I’ll bring it into Walmart,” he said. “They’ll tell me to put it up before I hit somebody or have to threaten to take them away if I don’t do my chores.” 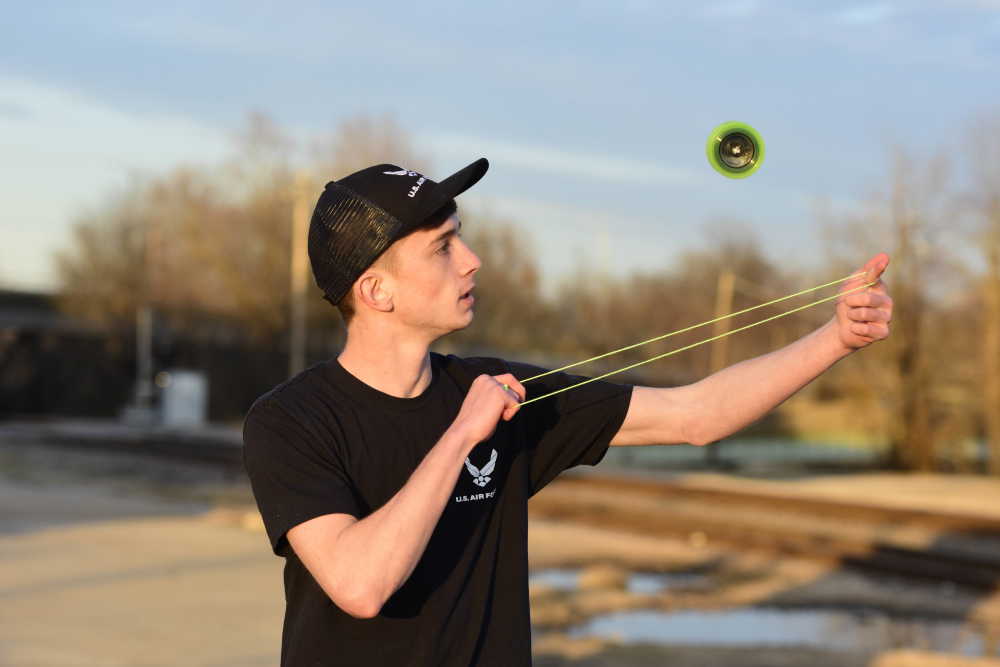 Wyatt Russom also uses yo-yos without an attached string. He likes using a plastic, neon green one that’s larger and easier to catch if he drops it.
DAR/Paul Davis

After going through the DVD, Russom started looking up YouTube videos to help him learn additional tricks. A trick can take anywhere from a couple hours to a couple days for him to learn.

Throughout his time at the Neelyville R-IV school district, Russom continued to both practice the yo-yo and entertain some of the other students. He said he would annoy his friends with it at times too.

“I don’t do it as much around them, but whenever they do see me pull out a yo-yo, they typically like to make fun of me for being a 19-year-old yo-yoer, but it’s all fun and games,” Russom laughed. 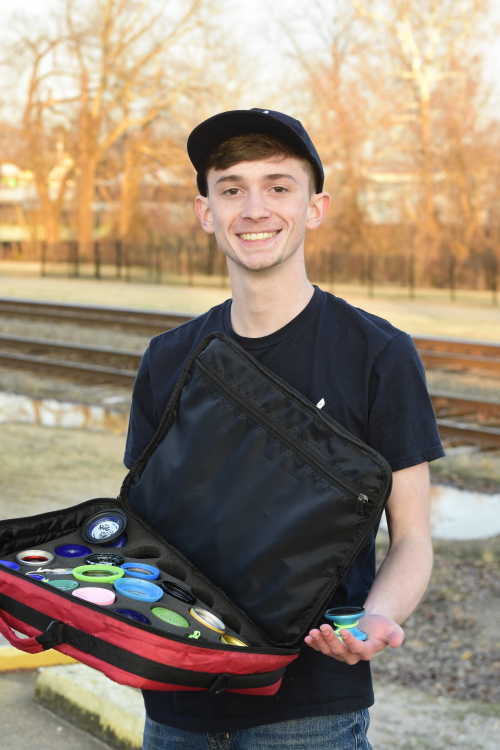 One of Russom’s favorite yo-yos is a metal blue one with an attached string that spins longer and is more durable.
DAR/Paul Davis

While he started out with one, Russom now has 20 in a special-designed foam-filled case that keeps each snug and secure to avoid damage or scratches.

In Russom’s case, he has yo-yos with both attached and not attached strings, which allows him to do different tricks. The yo-yos without attached strings mean he’s able to cast the body of the yo-yo into the air and catch it on the string to keep the momentum going.

Two of Russom’s favorite yo-yos are a metal blue one with an attached string and a plastic, neon green one without an attached string. The metal one, he said, spins longer and is more durable, but the one made of plastic is bigger and therefore easier to catch if it drops.

Russom has taken his yo-yoing hobby outside of his bedroom and used it to perform at several events, including the Iron Horse Festival and at several of the school district’s Veterans Day events in recent years.

During the most recent Veterans Day event, Superintendent Debra Parish announced Russom as “the yo-yo man” to cheers from the crowd of students.

Before these kinds of performances, Russom said, he tries to work out a routine that goes with the flow of the song and build up tricks to get a crowd reaction.

“To my friends, they’ve seen it for forever so they’re used to it,” he said. “To little kids, they love seeing it and I just always love exciting them because it’s always so much fun.”

While Russom doesn’t really have a favorite trick, he said there’s several he gets requests for regularly.

“One that I do, that I wrap around my legs (is common),” he said. “Or doing my off-string yo-yoing.”

Russom said when he was younger, he did some research into yo-yo competitions, but never went for one.

“The talent those guys have is unbelievable,” he said. “I just don’t practice nearly enough or as much as I did back then. It’s just more of a hobby these days.”

During high school at Neelyville, Russom joined Future Business Leaders of America, Future Farmers of America, basketball and track, which took some of his time from yo-yos.

After graduating in May, Russom is preparing for his next adventure.

He leaves the area Monday for Memphis, Tennessee, and a flight to San Antonio, Texas, where he’ll start in basic training for the Air Force. After basics, he doesn’t know where he’ll go.

Joining the military is something of a family tradition for Russom as his grandfather served in the Marines and his brother-in-law currently serves in the Air Force.

Russom has spent his entire life in Poplar Bluff and said he’s excited for the chance to see other places.

“I’ve never really gotten the chance to go out and see the world, besides family vacation,” he said. “I’ll get to be living on my own and it’ll be a great new type of experience.”

His concern, Russom laughed, is the idea of being out on his own without his family. However, he said he’s not too concerned about it because the Air Force takes care of their soldiers. He does expect it to be an adjustment.

Despite yo-yoing being a hobby for him now, Russom said he’s learned things that will help him going forward in life and joining the Air Force, which includes the key lessons the NED Program worked to teach the students when he saw it.

“Persistence, never giving up on something, just keep at it and you’ll meet your goal,” he said. “You can’t really pick (a yo-yo) up and be a natural at it. Nobody ever really has been. It takes consistent practice at it, hours upon hours a day.”