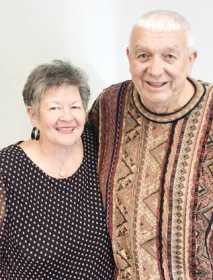 A reception was held in honor of the couple Nov. 9 at Fellowship General Baptist Church in Poplar Bluff. The event was hosted by the couples’ daughters, Michelle Wooldridge and Martha Kirkman, along with Sharon’s sister, Janine Heath.

The Kissingers were both raised in the small Pulaski County, Missouri community of Crocker. A high school coach introduced David to Sharon and the couple wed on Nov. 1, 1969. 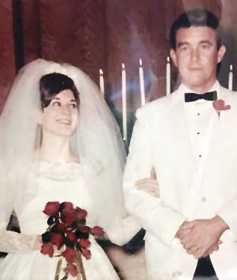 David and Sharon Kissinger on their wedding day.

Early in their marriage, the Kissingers moved to Jefferson City, Mo. where David began working for the United States Postal Service (USPS). The couple was soon blessed with two daughters.

The Kissingers moved to the Poplar Bluff area in 1982 when Sharon was offered her own office with Edward Jones. During this time, David transferred to work with the local postal service. In the early 2000s, David retired from USPS after 35 years of service.

In 2006, Sharon and her son-in-law, Erick Kirkman, opened their own investment firm, Kissinger & Kirkman Investment Centre, LLC in Poplar Bluff.

The couple loves to travel and spend time antiquing. Their greatest joys are spent with family and exploring.

The couple is planning an anniversary family trip to Branson in the coming weeks.