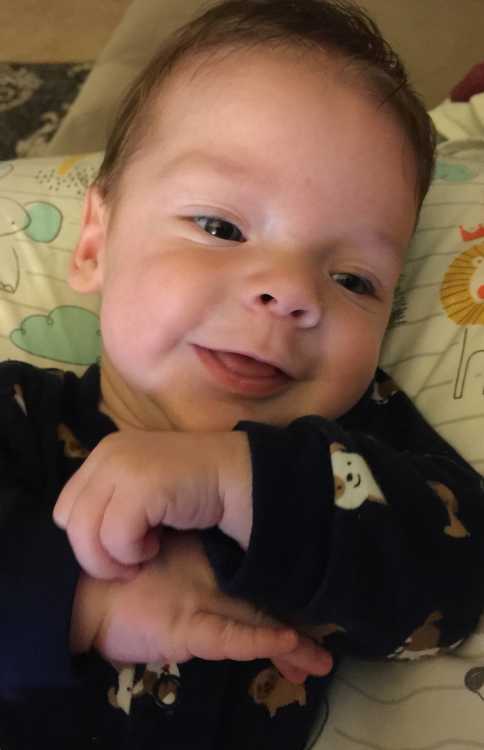 My nephew, AKA cutest baby ever.

Something happened a couple of weeks ago that could have made me believe the worst in people, but I’ve decided to take a different approach.

Rather than focus on the dishonest actions of one, I’d like to focus on all of the efforts of people who didn’t know my family, or each other, to make the situation right.

Earlier this month, my younger sister was the third vehicle in a four-car accident on I-55 in Jefferson County.

To add a little bit of perspective, in February, my sister had a little boy after a difficult pregnancy. He spent a month in the NICU, but is home and healthy now. (In my totally unbiased opinion, he’s the most beautiful baby ever - see my column on our website for proof.)

My sister also began dealing with some serious postpartum depression issues after Liam came home from the hospital. She and her husband are just now getting back into a good routine.

So this accident felt a little like, what more can go wrong, when it happened, and she asked me to come up and help take care of things.

Fortunately, no one was seriously injured in the accident.

But the task of dealing with everything that comes after, from emergency room bills, to tow fees and insurance companies, can challenge all of us to remain positive.

My sister had the compounded misfortune of ending up with a tow company that I can only consider as predatory and dishonest.

They are the sole provider used by the city where she had her accident. Their fees for a six-mile tow, and 15 hours in the tow yard were $575 by 8 a.m. the day after the accident. That included $250 for responding to the accident and $250 in accident clean up fees.

When we went to the yard to request, in the most polite and calm manner, a copy of the bill listing the charges, I have to admit I was shocked by the reception.

An individual began screaming at us and threatened to call the police, saying they only dealt with the insurance companies.

Our insurance company had advised us to pay the tow yard before the storage fees stacked up, because it might take several days to sort out the cause and fault in the accident.

The individual did end up calling the police, despite the fact that we left the tow company office when the request was made. A very nice officer came out and spoke with us, saying misunderstandings happen (There was no misunderstanding on our part, this company used the threat of police as a response to a simple request for a copy of our bill. I’d also like to add, no one has ever called the police on me before, so I’m sure the surprised look on my face was priceless).

Later that day, in a phone call, the same individual made a counter offer, we could pay $150 and my sister could surrender the title to her vehicle. According to posts on that company’s Facebook page, this is an offer they’ve made to other people after one day of storage costs were wracked up.

A very nice woman at our insurance company said, this is why premiums are so high, and I could hear the frustration in her voice.

We also contacted another tow company in the area to get rates, just to see what was normal. Accident response for them is $62, accident clean up, $40. But that company isn’t part of a rotation used by the police department that responded to the accident.

We followed up by contacting that police department to ask if they were aware of the practices of the company they use. A very nice captain said, no, he wasn’t, but the city had an exclusive contract with the tow company and his hands were tied.

So we called city hall, where a very nice official said the police department was mistaken. A rotation should be used to respond to accidents.

Both asked us to write letters to the city manager explaining our experience.

We plan on following up and I’m hopeful that it will impact how operations are handled there in the future.

With the exception of one individual at the tow company, every person involved was exceptionally nice and helpful.

I believe the fact that we approached them in a respectful manner helped.

By and large, I’ve found that most public officials truly do want to help, if they can.

While there are certainly many situations beyond their control, when they have the chance to help make something better, most want to do that. Especially if they are approached in the same respectful manner which we also want to be treated.