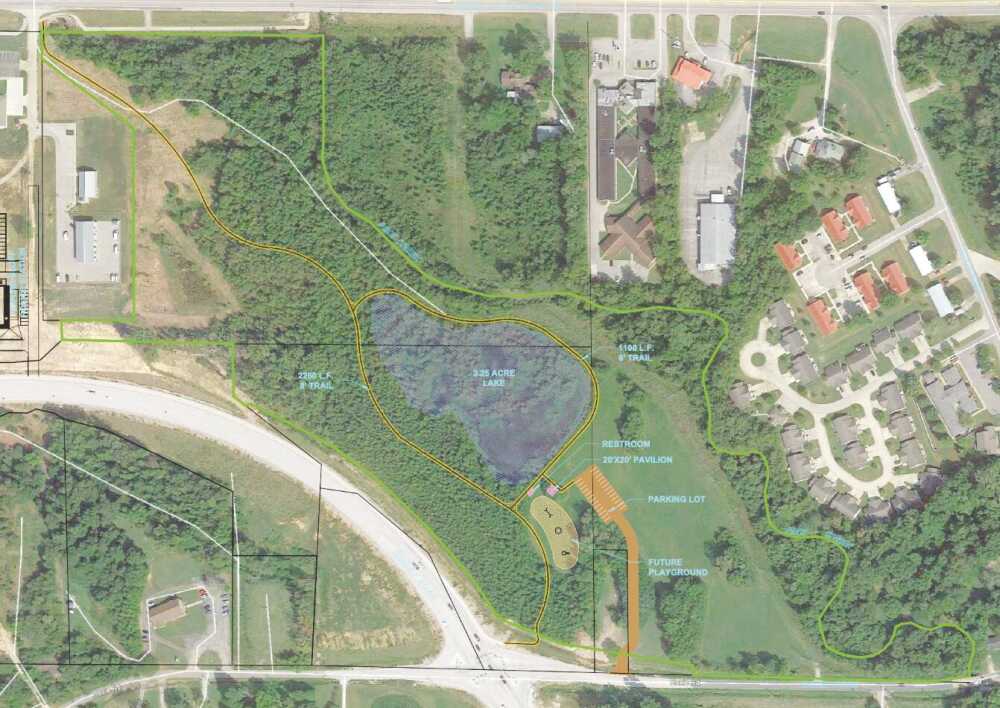 If things go as Poplar Bluff officials hope, residents of the city and surrounding areas may have a new place to fish in the future.

On the drawing board is a potential fishing pond, to be constructed in what is expected to be called the Pike Creek Park. It would be located in the low, wetland area of the city’s new property between Roxie Road, Shelby Road and Kanell Boulevard, and adjacent to the under-construction police department.

“I think it would be a nice amenity for our town to have for people that live here, but also for people who live outside of town,” said city manager Matt Winters.

“This first piqued my interest when we found out about this outdoor tourism and recreation grant that was available,” Winters said. “We brainstormed ideas that would fit within those funding parameters, and this is all something we agreed would be a great project for us to look at and try to get some funding for and get developed.”

The grant, if awarded, Winters said, would be different than the typical one the city applies for.

“So many times, the things we look at for grant funding are for essential services like streets and bridges. This is something that’s more of a quality of life type of thing,” he said.

“From my perspective, we look at things that Poplar Bluff doesn’t have that really are quality of life issues that maybe we can try to address,” Winters added. “Having a public access fishing place in town is not something we have.

“If you look at other cities we compare ourselves to like Sikeston or Cape Girardeau or Jackson or Farmington or even Dexter, those towns have really nice public access fishing ponds that are in the city.”

Currently, Winters said, Smith & Co. Engineers is working on the plans for the pond.

“The pond would be three and one-quarter acres, and there will be a walking path that circles the pond. There also will be a parking area,” Winters explained.

Additionally, restroom facilities would be located near the pond, as well as a 20-by-20-foot pavilion. Engineering drawings also depict a future playground in the park area. Access would be off an entrance from Roxie Road.

The pond trail, he noted, would connect to others nearby.

The park and pond site, Winters said, are in the Pike Creek flood plain, but he does not anticipate any problems with water flow during heavy rain events.

The grant application, showing an estimated project cost of nearly $800,000, still is in the works.

“They haven’t finished it yet. It will probably be submitted this month, and we’ll probably be presenting the application to the city council at the Jan. 18 council meeting,” he said.

Once the grant application is submitted, Winters does not expect it to take very long to hear back from the federal funding agency.

“These are done as they receive them, so I would expect to hear something within 90 to 120 days,” he said.

The current plans, Winters noted, are contingent upon receiving the grant, but even without it, he wants to develop the pond.

“If for whatever reason we don’t get approved for it, we’re going to look at other options to get it done. It’s something I’m really excited about and really want to see get done,” Winters said.

Winters is hopeful the pond eventually can be enrolled in the Missouri Department of Conservation’s winter trout fishing program, in which MDC stocks rainbow trout each fall into designated waters and catch-and-release fishing is allowed until February.

Those conversations, he said, are just beginning.

“I’ve known about these other towns that have ponds that are stocked with trout by the Department of Conservation, and it’s something I think is really a neat idea,” Winters said.

Other species also are expected to be stocked, he said, and he’s talking with MDC fisheries biologists about which ones would be best.

“It’s kind of a neat project,” Winters said. “I’m excited about it.”