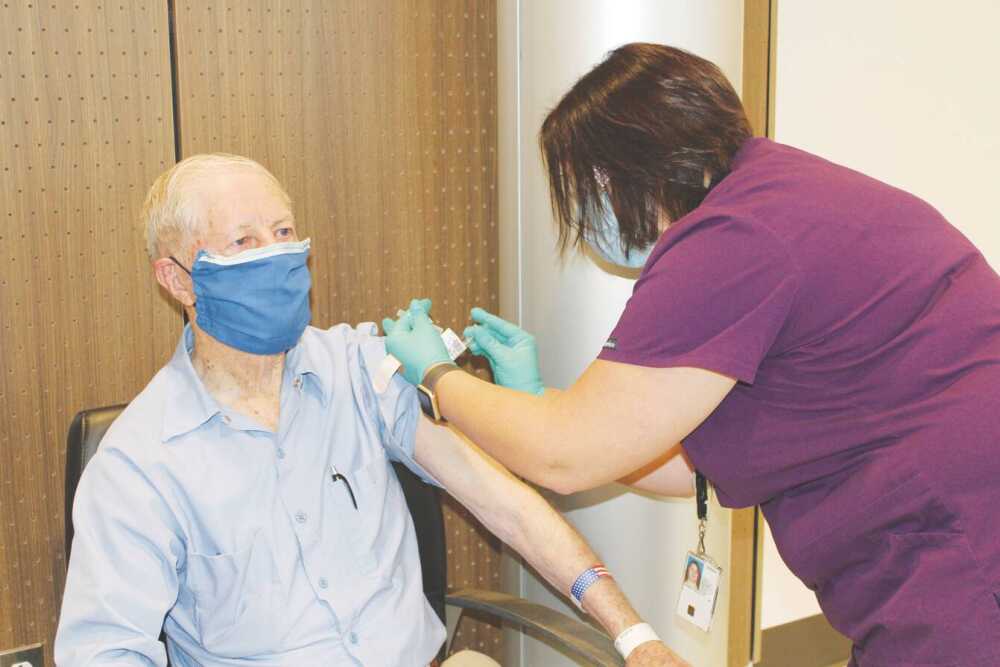 Proudly wearing hats symbolizing their service with the United States military, Wilbur Allen, 92, and David Baker, 87, both of Poplar Bluff, walked into the lobby of the John J. Pershing VA Medical Center Thursday morning to get the COVID-19 vaccine. The VA staff asked each person a series of questions before approving them for the shot.

Allen, who served in the Army for two years in the Philippines, wore a camouflaged hat with red, white and blue stars.

Allen was surprised when he received the call offering the vaccine at the local VA. 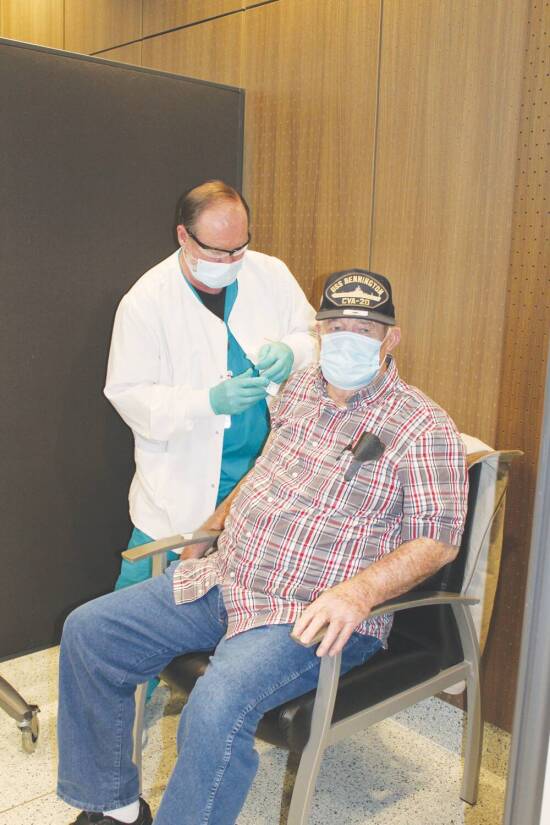 ôI am willing to give it a good try,ö Allen said, fighting back a tear as he recalled fellow veterans, friends and family who have died from the disease.

He called the local VA ôa good place to be.ö

Allenĺs daughter, Diana Dragon, is a registered nurse at Poplar Bluff Regional Medical Center and his son-in-law, Mark Dragon, is a respiratory therapist at the VA. His son is Clayton Allen of Puxico.

A Navy veteran, Baker served aboard the USS Bennington Carrier from October 1955 to 1957 to do damage control and his cap proudly proclaimed his service.

Baker tested positive for COVID-19 earlier, but never had any symptoms.

Baker and his wife, Isabell, 81, were surprised when they received the call for him to receive the shot.

While he didnĺt hesitate taking the vaccine, smiling, Baker said, ôthe kids were against it, but they donĺt run my life,ö

Baker said, he hasnĺt been a patient in the local medical center since he moved to Poplar Bluff from California. He worked on the Irvine Ranch 40 years from 1954-1994 except for the two years of military service.

While in the military ôI went all over the world,ö he said. ôI thank God for everything that has happened over the years.

ôI always come out on top thanks to God for that. I just love this whole world.ö

The medical center staff started calling veteran patients 85 and over this week to offer appointments to receive the Moderna COVID-19 vaccine.

The VA will administer vaccinations from 9 a.m. to 3 p.m. on weekdays, as well as on Saturdays, Jan. 16 and Jan. 30. Veterans do need to wait for VA staff to call to schedule an appointment, said Angela Smith, public affairs officer.

ôWeĺve received a little over 700 doses so far,ö Smith said. ôBecause we have to give this in groups of 10 doses, we have to schedule 10 appointments at a time.ö

The vaccine has been determined to be safe and effective and will not give the recipient COVID-19, VA staff said in a press release Tuesday. Common side effects include pain or itching at the site of the injection, fever and fatigue. These symptoms typically resolve within 48 hours, officials report.

Veterans will be expected to schedule an appointment to receive the second dose approximately 28 days after the first. Officials say veterans aged 75-84 will be the next group contacted, as supplies permit.