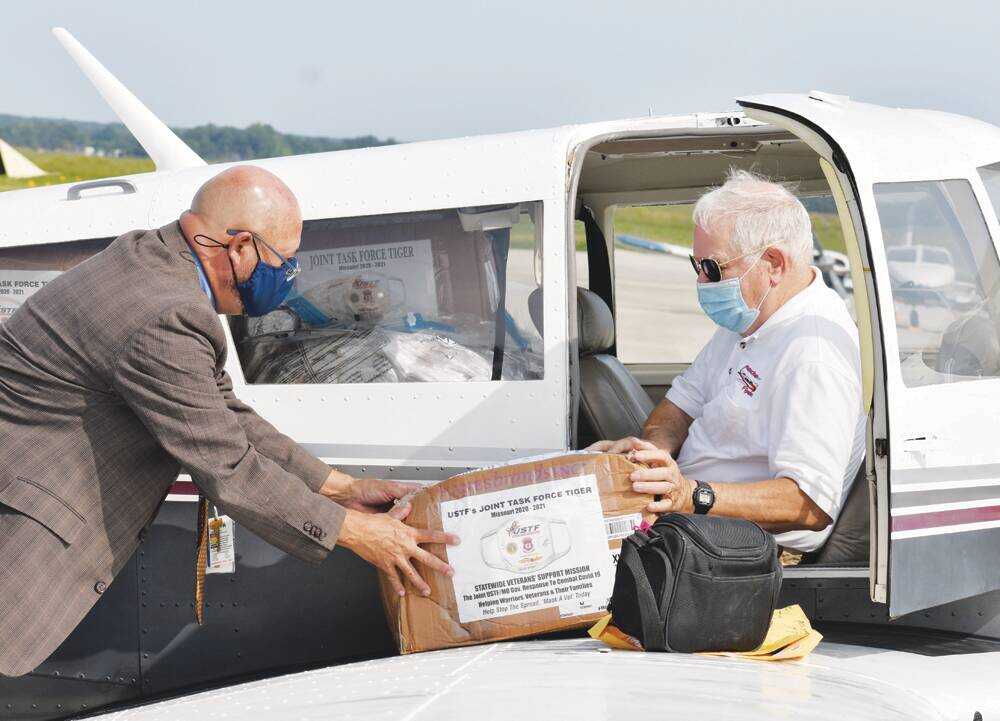 Three hundred and forty pounds of masks, or 10,000 face coverings, headed for veterans and their families in the Poplar Bluff area. That’s about the limit of what can be packed into the rear of a Piper Comanche 260, with just a little finagling by the two volunteer pilots who brought the donation Monday morning.

The United States Exercise Tiger Foundation is on a mission to “Mask a Vet,” making stops across the state to deliver 250,000 masks.

And, when Col. Ted Forester and co-pilot, Farris Wooten, found out about that mission, they volunteered to make the flight to the Poplar Bluff Regional Business Airport from their base in Columbia, Missouri.

This project is about veterans helping veterans, said Forester, who served in the Army.

“Too often veterans are overlooked, particularly when I got out of the service, after serving during the Vietnam era,” he said after unloading the masks Monday.

The masks will be distributed in packs of five for veterans and their families, said VA Interim Medical Center Director Paul Hopkins.

“It’s about veterans taking care of veterans,” said Hopkins. “Veterans are going to pull together.”

The “Mask a Vet” Campaign is unique to Missouri and is the largest humanitarian mission in the organization’s history, according to USTF officials. Missouri’s SEMA delivered the first 50,000 masks provided by the U.S. Department of Public Health Service and the Kingdom Pilots’ Association, and USTF staff will distribute the masks to VA Hospitals, VFWs, American Legions, and other veterans’ groups.

Both Forester and Wooten are members of the Kingdom Pilots’ Association.

“We will distribute the masks statewide till our inventory is completely depleted,” said USTF National Executive Director, Susan Haines. “There are five masks to a package, and we envision each veteran and their family members to have an unopened pack of five per person. We predict that at least 30,000 veterans and their families will be the recipients during Phase I.”

“This is the crisis of our lifetime,” said Haines. “COVID-19 will one day be defeated, but until then, carrying on this fight against an unseen enemy by providing masks to Missouri veterans, warriors, guardsmen, and their families is but one way we can help.”

The United States Exercise Tiger Foundation was formed to honor veterans, active military, students, citizens and communities for their patriotic actions and derives its name from Exercise Tiger, one of a series of large-scale rehearsals for the 1944 D-Day invasion of Normandy during World War II, in which over 700 American servicemen died.

The masks were provided by the United States Exercise Tiger Foundation (USTF) in partnership with the Missouri State Emergency Management Agency (SEMA), the Office of the Governor, the U.S. Public Health Service, and the Kingdom Pilots’ Association (KPA).