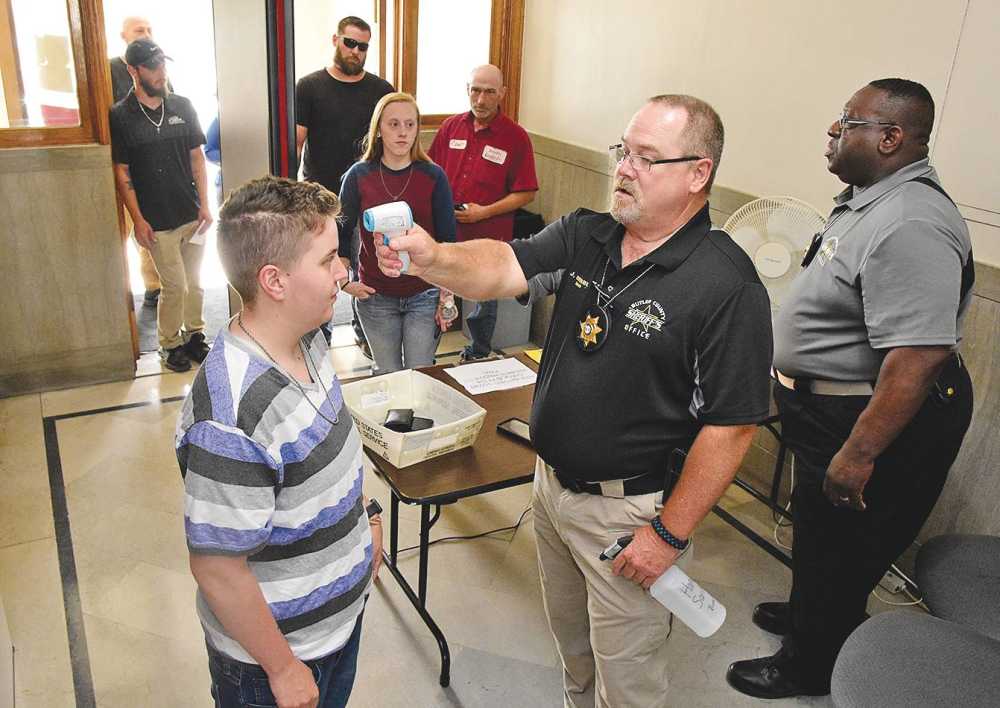 Making sure everybody who enters the Butler County Courthouse is safe and free of COVID-19 has become the responsibility of two retired Poplar Bluff police officers.

Stationed just inside the east door of the courthouse are retired Lt. Ralph Jefferson and Patrolman Jim Gerber, who ask health-related questions, take temperatures and man a metal detector.

The measures were put in place when the courthouse reopened to the public after its closure during Missouri’s stay-at-home order.

The screening/security is going well and is being paid for through the Coronavirus Aid, Relief, and Economic Security (CARES) Act, said Butler County Presiding Commissioner Vince Lampe.

“The guys are doing a good job, checking temperatures, asking a few questions,” Lampe said. “It’s essentially security for everybody there.”

Those entering, he said, also are asked to empty their pockets and pass through a metal detector.

Until recently, Lampe said, Butler County was one of the last courthouses around without a metal detector in place.

Security cameras also were recently installed to cover “pretty much the whole courthouse … we might as well do it all (screening/security) if we could do it,” Lampe said. “ … It’s just precautionary all the way around.”

“We’re making sure people coming in here are not bringing anything in with them, any weapons or the coronavirus; we’re making sure everybody stays safe,” Jefferson said.

The retired officers have four questions they ask as they check temperatures to make sure no one is entering with a fever, Jefferson explained.

“We also have hand sanitizer; we sanitize everyone’s hands,” he said.

Initially, it took some “getting accustomed to what we are doing,” said Jefferson. “ … It was a matter of us trying to learn the system, getting acclimated to the procedures.

“Jim and I can get people through pretty quick. They don’t have to wait long.”

If there are 10 to 15 people waiting to get in for court, “we ask them all the questions at the same time,” Jefferson said. “That helps us run them through quick.”

The public, Gerber said, seem to “accept what we are doing. Initially, there was a couple of drug arrests.

Jefferson said the response has been positive.

“We actually had a couple people come in, and they even commented on the way we are greeting people,” Jefferson said. “They really like it.”

Courthouse officials, including the judges and commissioners, are hearing comments that people “like having us here because we’re checking for drugs, checking for weapons,” Jefferson said. “They also believe we are a deterrent to (people) coming into their offices, acting a fool or cutting up because they know officers are right here.”

According to Lampe, some have been “tickled with” the security.

“I think it is a much needed thing,” Lampe said. “You can’t go to the state Capitol without going through a metal detector.”

Lampe said the CARES money will pay for the service through Dec. 31.

“I’m hoping we can keep the funds to continue it once the pandemic is over,” Lampe said.