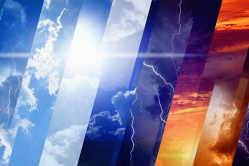 A flood warning remains in effect until Sunday morning for the Poplar Bluff, after heavy rainfall in the past 36 hours.

A storm front that moved through overnight also caused damage that severely delayed Amtrak trains, took off part of a building roof in the Coon Island area, and caused temporary power outages in Ripley County.

Just over 3 inches of rain was reported at the Poplar Bluff airport from Friday into Saturday. The heaviest period saw 1.57-inches of rain between midnight and 6 a.m. Saturday.

Wind speeds of up to 46 miles per hour were registered around midnight, with speeds of 23-24 mph seen again around 3 a.m. and 10 a.m. Saturday, according to the National Weather Service.

Minor flooding is still possible along the Black River, the NWS reports.

Members of the Poplar Bluff Severe Weather Response Team reported a partial roof was blown down in the Coon Island area of Butler County shortly before 1 a.m. Saturday.

Ripley County Emergency Management Agency officials also said their area saw a few temporary power outages overnight, along with some localized flooding. There was a report of a vehicle in the water at Oxly, but the passengers were able to exit the vehicle, said Brian Byrd, Ripley County EMA director.

According to Amtrak alerts, the intense storm early knocked a tree down across the track between Poplar Bluff and Walnut Ridge, Ark. Trains also were delayed due to flash flooding in Arkansas.

The southbound Texas Eagle passenger train was 6 minutes early arriving in Poplar Bluff at 11:36 p.m. Friday, but was going to be nearly eight hours late arriving in Little Rock. The Amtrak engine developed mechanical problems when it hit the downed tree. A replacement engine was being sent to the scene.

Amtrak’s northbound Texas Eagle is scheduled to stop in Poplar Bluff at 2:44 a.m., but it did not arrive until 8:23 a.m. — 5 hours and 39 minutes late. At least 10 people boarded the train, including a family returning to Estonia.

One female student at Notre Dame University in South Bend, Indiana, who lives in West Plains, Missouri, was among those waiting at the station with her family for more than 6 hours.