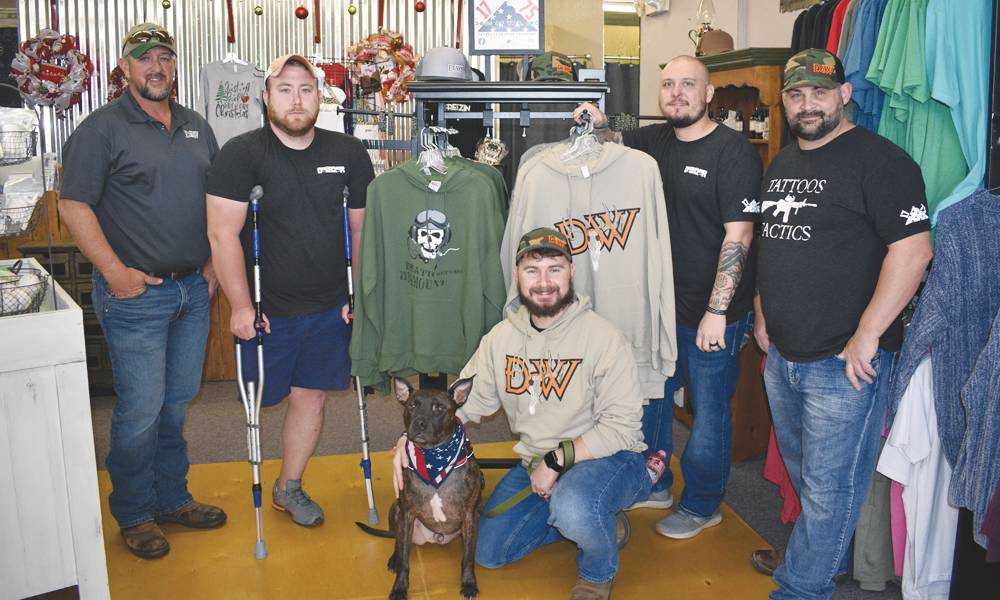 Veterans helping veterans is the mission behind Dogs of War Inc., a clothing apparel line available online and at Ketcherside Kountry.

ďLee (Willard) and I are both combat veterans Ö we were talking one day about how we could help veterans, so we decided to start selling T-shirts and taking the money we made from the shirts and doing things for veterans,Ē explained Dale Day, who co-owns Dogs of War with Willard.

Dogs of War Inc. has a line of menís T-shirts, hats and sweatshirts, with such sayings as ďDeath Before Dismount,Ē ďTattoos and TacticsĒ and ďCry Havoc and Let Slip the Dogs of War.Ē

Another design features a deer skull and the DOW logo.

ď Ö I think thatís what makes us such a great team. Weíre not afraid to say that sucks or thatís amazing.Ē

Willard said because of the ďcamaraderie from the military, weíre not afraid to be honest with each other.Ē

A lot of merchandise, Day said, is sold online on their website ó dogsofwarinc.com .

The name Dogs of War, according to Willard, comes from a quote in William Shakespeareís Julius Caesar, ďCry ĎHavocí and let slip the dogs of war.Ē

ďThat means a lot to all of us because we are all veterans, and thatís kind of what we do,Ē Willard said. ďWar is ugly, but we kind of signed up to do that and stand ready for them to let us loose to go do what we do best, protect the country.Ē

Since setting up shop in April, Day said, the idea has caught on, and he, Willard and their partners, Sam Shulaw and Jeff Kanell, have established partnerships with the Wake Foundation and Ketcherside Kountry, as well as Shadows Behind the Badge in St. Louis,

Shadows Behind the Badge offers free counseling services to first responders and anyone suffering from post-traumatic stress disorder, Shulaw said. Itís telephone number can be found on the Dogs of War web site.

ďIn the Southeast Missouri area, there are no programs for younger veterans,Ē said Shulaw. ďEverything is geared toward a lot of Vietnam-era veterans, which is great because they didnít receive a lot of care Ö at the time they needed it.Ē

ďThese veterans are struggling and turning to ways to cope that they shouldnít be turning to, and weíre trying to prevent that, catch them before they do that,Ē Shulaw said.

A need to help veterans and the creation of an apparel line ďkind of molded together,Ē Willard said.

Day agreed, saying, ďWe do this to do what we want to do, which is helping veterans.Ē

Willard said their passion is not just apparel, but the veteran community.

ďWhat we decided to do was build a team around us because whenever veterans come to us, weíre not all going to have the same experiences,Ē Day explained.

The team includes veteran ambassadors, such as David Lack, a Purple Heart recipient, as well as a female veteran of the U.S. Marines. It also includes Army, Marine and Navy veterans.

When veterans come in, ďwe can say, Iíve never been through what youíve gone through, but we have someone who can talk to you Öbecause they have,Ē Day explained. ďWeíve built our team Ö where we can help any veteran that comes in.Ē

The Dogs of War team, Day said, has helped veterans with different things, including food and money.

Willard said team members also have put veterans into contact with such services as Alcoholics Anonymous.

Day agreed, saying, ďWe want them to use the best abilities they took out of the military and put it to use in their lives.Ē

Or, Day said, they can help the veterans figure out the GI Bill.

Having gone through vocational rehabilitation himself, Day said, ďwe know those processes.Ē

In March, Day said, team members also will take veterans on a hunt, which will be a ďcounseling/therapy thing for them.Ē

The goal, he said, is to give the veteran(s) ďsome kind of purpose, something they can do thatís meaningful in their life.Ē

ďWhen we all got out, it was really hard to find that purpose when you go from serving in the military,Ē Willard said.

Military service, he said, is ďvery structured. You know exactly what youíre supposed to be doing, and ďwhy youíre doing it,Ē added Willard.

ďThe things you did over there (on overseas deployments) really meant something,Ē Willard said. ďYou come back over here, and you go about your day-to-day life, trying to get purpose Ö .Ē

Willard said they want the veterans ďwho served in our generationĒ to have somewhere to go where others ďcan relate (and) put them on a positive path.ď

Shulaw said they hope to branch out beyond this area.

ďEventually, we would love to help get (veterans) scholarships and things like that,Ē Day added.

For more information about Dogs of War apparel line or veteran services visit its website at https://dogsofwarinc.com .