PB man arrested on suspicion of driving into Sheriff’s office 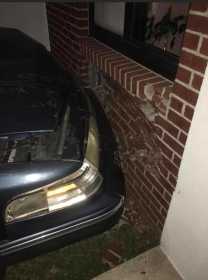 Authorities say a suspected drunk driver crashed his car into the side of the Butler County Sheriff’s Department early Thursday morning.

At about 12:45 a.m., Sgt. Aaron Pratt was completing a report in his office when he heard “a loud, thunderous boom that shook the building,” explained Butler County Chief Deputy Wes Popp.

Pratt, Popp said, ran outside the building and found a 1997 Ford Crown Victoria had hit under the windows on the west side of the sheriff’s department near the double doors, located near the intersection of Main and Pine streets.

“He opened the door on the driver’s side of the vehicle and removed Chaddrick Smith from the vehicle,” Popp said. “He could smell a strong odor of alcohol on (Smith’s) breath.”

“While Pratt was waiting on the highway patrol, he conducted a safety search … he discovered a loaded .38(-caliber) revolver, which was removed and placed into evidence,” Popp said.

Smith, 29, was arrested by the highway patrol at 1:18 a.m. on suspicion of DWI and failure to drive on the right half of the road resulting in an accident.

“It looks like he tried to make his left-hand turn about 25 feet before the intersection,” said Popp, who indicated a property damage charge also will be sought against Smith.

The extent of the damage to the building, Popp said, is not known at this time.

Popp said Smith also was arrested on suspicion of unlawful possession of a firearm.

Smith, according to Popp, is a convicted felon, having been convicted of a robbery through Poplar Bluff.