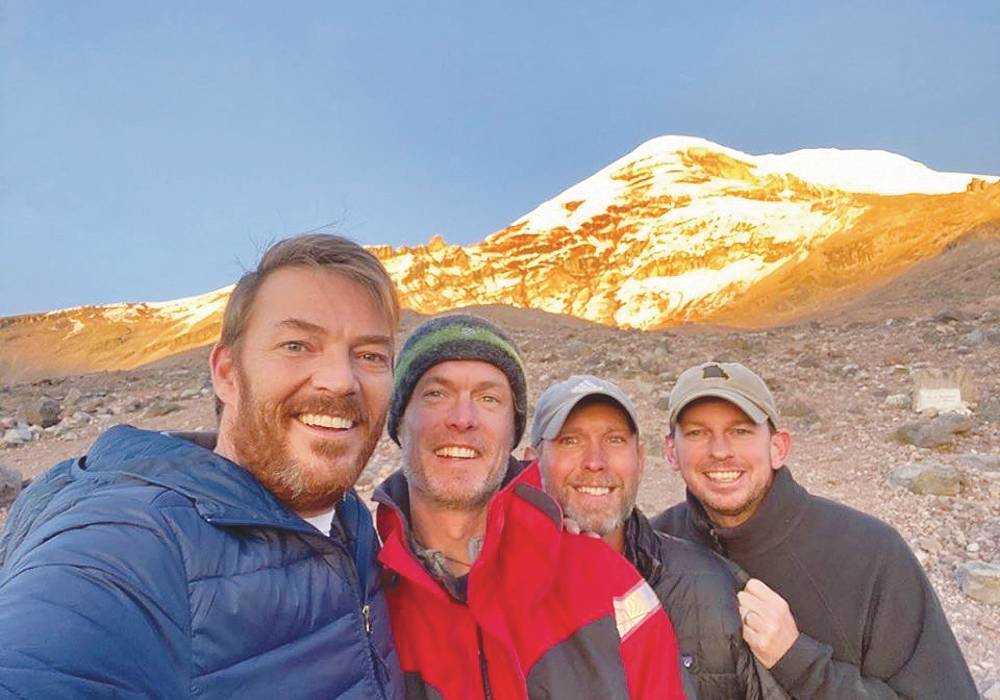 Todd Richardson (from left), Bob Summers, Jeremy Booker and Richard Moore stop for a photo at the base of Mount Chimborazo.
Photo provided

A 12-day trip of a lifetime took four childhood friends from the world’s highest mountain, Chimborazo, to the Amazon rainforest and other sites along the equator in Ecuador.

Poplar Bluffians Bob Summers, Todd Richardson and Jeremy Booker, along with their friend, Richard Moore of Columbia, spent more than a year and a half planning and preparing for the trek.

Summers said, “this would be in the top 10 things in my life. It was one of the coolest things I’ve done. I would not take a million dollars for the trip, but I wouldn’t want to do it again.”

Footsteps are shown in the snow after the four friends returned from the summit of Mount Chimborazo.
Photo provided

But, he admits he’ll do other things with his friends.

Reaching the top of the 20,702-foot peak required an overnight climb because the men had to cross glaciers that would melt during the day. They also faced other interruptions due to heavy rain and snow.

It was Richardson who convinced his childhood friends to make the trek, not the first adventure they have tackled together. 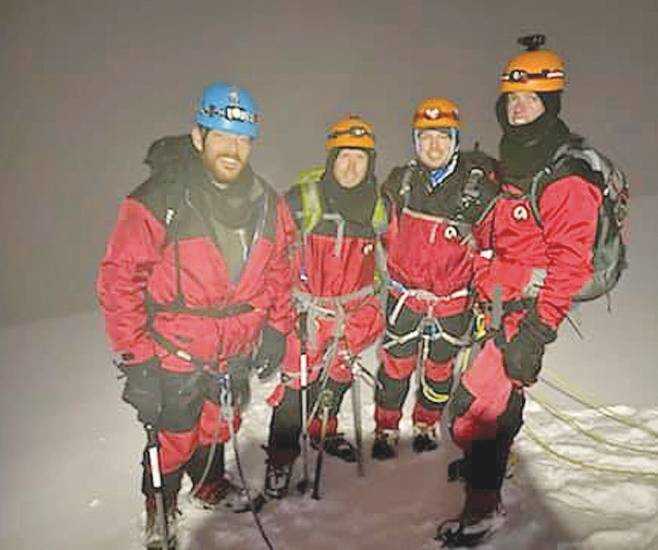 Todd Richardson (from left), Jeremy Booker, Richard Moore and Bob Summers are shown at the base of Mount Chimborazo.
Photo provided

Summers recalls he was on a boat in the Island of Martinique when Richardson called and said “we are going to climb Mount Chimborazo” on the equator. Richardson is the former speaker of the Missouri House of Representatives and current director of Missouri HealthNet.

Summers and his family were on a yearlong sabbatical sailing around the Caribbean doing a mission to deliver charity and Christian spirit to developing countries.

“Todd convinced the rest of us,” said Summers, an engineer with Horner and Shifrin Inc. in Poplar Bluff. 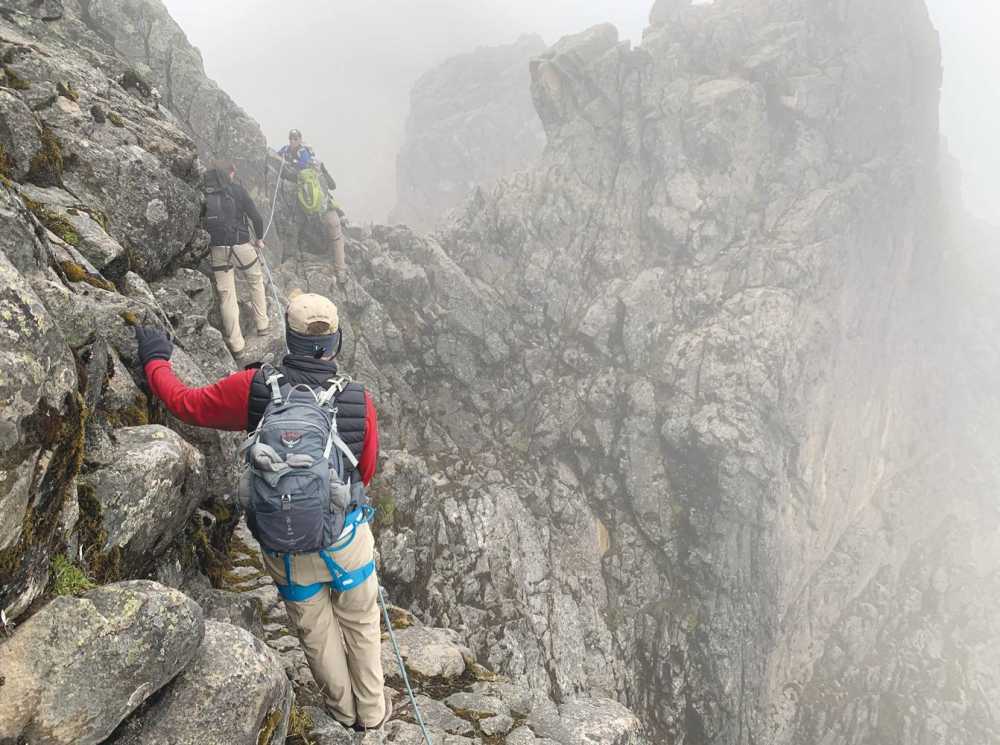 Booker said he fell for Richardson’s hook and agreed up front to make the trek, and “it was a good decision.” Booker works for a pharmaceutical company during the week and manages the family restaurant The Fishin’ Pig on the weekends.

The men became friends in their youth and have kept bonding by climbing mountains and hiking. Richardson, Summers and Moore are Eagle Scouts. Booker also grew up with Richardson and Summers.

Every few years, the men plan an excursion. At age 15, they hiked 110 miles at Philmont Scout Ranch located near the town of Cimarron, New Mexico. When they were in their early 20s, they organized an adult-only trip, and in 2017, they went back to Philmont.

Extra steps were taken to prepare for this trip.

“We went to Planet Fitness almost on a daily basis,” said Booker adding, they spent months building up their strength and endurance stair climbing and running.

Booker has also run marathons, including the Boston Marathon the year of the bombing. Summers worked out wearing a backpack filled with weights.

The men left Nov. 8 to start their trip, returning Nov. 19, after a successful climb, and what Booker calls “an adventure of a lifetime.”

Once the group arrived in Ecuador, more training was required, this time in glacier climbing. The men would also have to acclimate to the change in elevation. Rain and snow would pose problems throughout the trip.

Everything was done with the help of a guide, which, Summers said, was one of their best decisions.

Moore, who admitted to being the planner of the group, said, “We arrived in Quito and had two days to begin the acclimation process.”

“We had planned to hike four mountains/volcanoes while in Ecuador. Mount Pichincha in Quitos was the first and only one not covered in snow/glacier. We were forced to abandon the plan of climbing (it),” continued Moore, formerly of Bloomfield, who is general counsel of the Missouri Department of Heath and Senior Services.

While a lack of snow was a problem there, heavy snowfall caused difficulties elsewhere.

“Due to rain and heavy snow, we had to skip the second mountain where we were doing our glacier climbing practice and instead went to Mount Chimborazo and climbed half way up to do glacier practice and continue to acclimatize,” Moore said.

The third climb was Mount Cotopaxi, the second highest mountain in Ecuador, which erupted as recently as January 2016.

Moore said, “We climbed at night due to the fact it and Mount Chimborazo are covered by a glacier. During the day, the glacier melts and makes climbing too dangerous.

“We made it 90% to the top, but were forced to abort the climb as the recent heavy snowfall created a high avalanche risk.”

The rest of the day was spent in the tourist town of Banos, the gateway to the Amazon, where the men visited waterfalls, and zoos.

Summers explained when they were unable to climb some of mountains, they practiced the rock climbing techniques and visited the country’s gorgeous cathedrals.

He especially enjoyed meeting the people and learning about their culture. Murals in the churches showed the people asking the saints to come and help during the volcanic eruptions, he said.

“We tasted the local cuisines and got to meet folks,” Summers said. “People there are so kind.”

“At approximately 10:30 p.m. Nov. 17, we departed to climb Mount Chimborazo,” Moore said. “We all summitted just after dawn and spent about 45 minutes on the summit. We made it back to the refuge 12 hours after we departed.”

Richardson describes the trip as a “really wonderful experience,” “fascinating, great and a heck of an adventure.”

The men used an app during their trip so they could stay in touch with their wives and children.

Richardson’s family was “excited” about his trip and enjoyed sharing videos, but “they were glad when dad got back.”

He considers it a learning experience for his children and believes it will make them want to travel.

Richardson said, “We sure had a great experience,” and he is looking forward their next adventure.