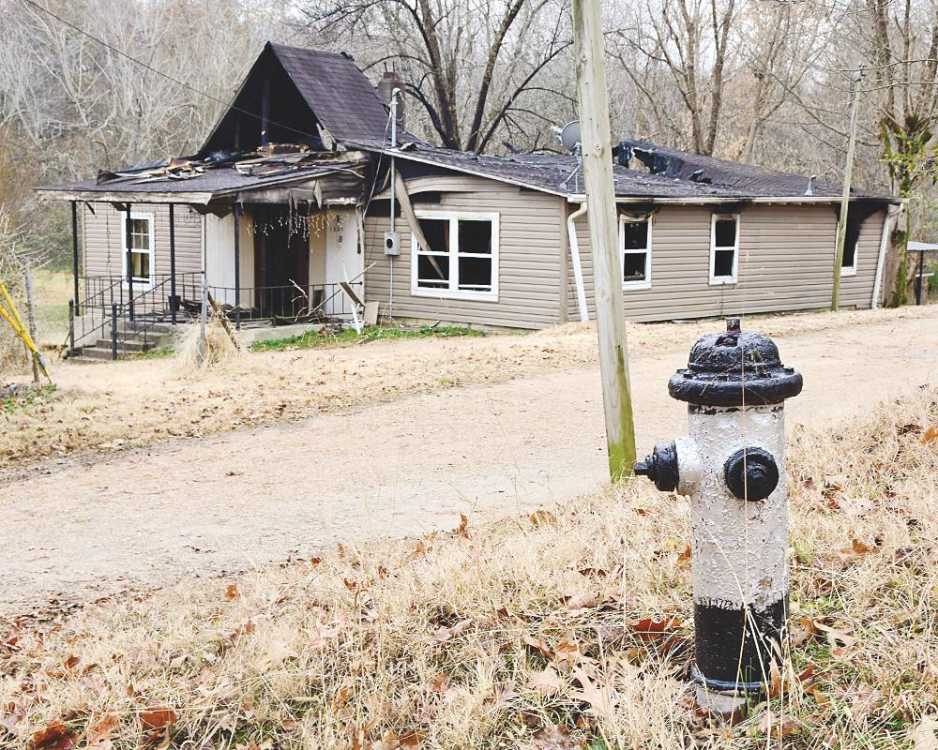 A fire hydrant, with black paint, is seen outside a burned house at 1521 Grand Ave. The hydrant, according to firefighters, has low pressure and could not supply enough water to stop the blaze at the house.
DAR/Paul Davis
Order this photo

A limited water supply and shortage of personnel hindered the Poplar Bluff Fire Departmentĺs efforts Saturday night in putting out a structure fire on Grand Avenue.

City officials say if there is an issue, it may need to be researched by engineers. Any possible work needed would have to be put into a budget for approval by the Poplar Bluff City Council, according to utility staff.

Firefighters responded at 11:46 p.m. to a fire at the 1521 Grand Ave. residence owned by Murphy Investments at Farmington.

When firefighters arrived, they found the home was fully involved, with the heaviest fire in one corner of the structure, Battalion Chief David Dudley wrote in his report.

The fire reportedly already had extended through the roof at the rear of the home.

ôWhen they pulled up, flames were coming out the roof and out of the back and side,ö said Chief Ralph Stucker.

As firefighters began to battle the fire, Dudley said, connection was made to a hydrant in front of the home, but ôit could not support enough water to put out the fire.ö

That hydrant, according to Stucker, is painted black, indicating it pumps less than 250 gallons per minute.

Dudley said firefighters then made an ôadditional hydrant connection and laid out 1,000 feet of 3-inch supply line.ö

That hydrant, located at the intersection of Lexington and Grand, also is painted black, Stucker said.

Having both painted black ômakes for a tough day,ö Stucker said.

ôEven with the two connections, the water supply could not provide enough water to properly and quickly extinguish the fire,ö Dudley said.

ôWe just donĺt have very good water pressure in that area,ö Stucker said. ôWe would start making an attack on it and then lose pressure on it completely.ö

Although the black hydrants are not uncommon around town, Stucker said, firefighters usually donĺt have a ôfire as advanced as this oneö when water pressure has been an issue.

Dudley said additional firefighters were called back to assist at the scene ôdue to the on-duty crew running only a total of six people.ö

One stays at the hydrant, where the hose is wrapped around, as another firefighter drives the truck back to the scene to unroll it, said Stucker.

Due to that situation, Dudley said, an interior attack was not possible. Firefighters did not enter the structure until ôoverhaul was being conductedö after the fire was out.

Neighbors had reported the homeĺs occupants had ôvacated the buildingö earlier in the day, Dudley said.

A total of about 10,000 gallons of water was used to put out the fire.

Once all the hot spots were put out, the called-back firefighters were released, Dudley said.

Municipal Utilities and Spire personnel also responded to the scene.

Firefighters returned to the home at 8:35 a.m. Sunday after the fire rekindled and used 50 gallons of water to put the fire out.

The home is still standing, and the fireĺs cause will be investigated by the State Fire Marshalĺs Office, Stucker said.

Stucker also intends to contact the cityĺs Water Department personnel about the situation.

ôThe hydrants have always been really weak in that area of town,ö Stucker said.

Municipal Utilities Manger Bill Bach said he didnĺt know about the specific Grand Avenue incident, but indicated a black hydrant means a flow of less than 500 gallons per minute.

That number is contrary to what was reported by Stucker, who also indicated firefighters lost water pressure.

The flow rate ôhas nothing to do with pressure,ö said Bach, who indicated the line was installed back in the 1990s.

The city has done some water main extensions in area, Bach said.

If the hydrant situation becomes an issue needing to be addressed, Bach said, Smith & Company could be asked to do a flow study in the area to see what needs to happen.

The engineer would assign a dollar amount to the project, which could then be put in a budget to be approved the city council, Bach said. ôIf they do, that budget for rehab or construction workö would be for a future year.