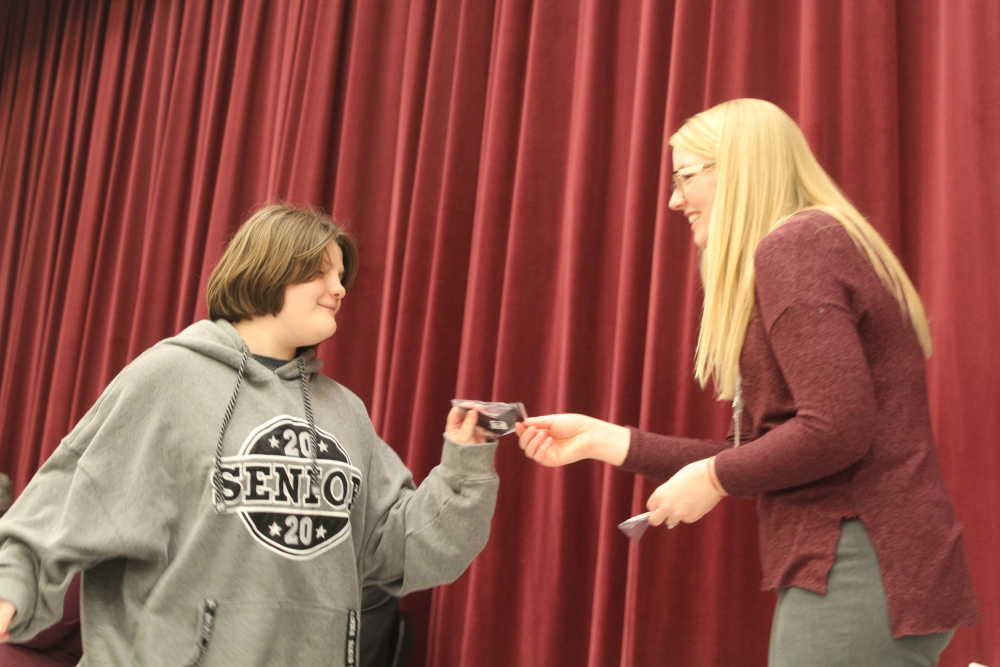 Over 200 Poplar Bluff High School students received recognition this week for academic success in the form of letterman patches.

The students receiving the recognition for the first year received ‘PB’ letters along with a chevron. Those who have met the requirements before received a chevron to go with the patch they already have.

Each year, the Academic Booster Club puts together an event to distribute the letters and recognize the students receiving them. In order to earn it, students must have a 10.25 GPA for the year, attend classes full time and take their core four subjects of English, math, science and social studies.

As part of the ceremony, former student and current sixth grade math and science teacher Soley Webb Dugas issued a challenge to the students.

Dugas said she originally thought the speech would be easy and she’d talk about the importance of academics. However, as she prepared for the speech, that didn’t feel right because if the students she spoke to didn’t already value their academics, they wouldn’t be there receiving the letterman.

Instead, she told the students not everything boils down to their grades, but rather attitude can play an important role.

“It’s not just about making good grades, it’s about the choices and sacrifices of you make to make academics a priority,“ Dugas said. “It’s about having the right attitude and holding yourself to a higher standard even if the others around you do not.

“We all know some people who are very, very intelligent and those people are people we admire. However, intelligence doesn’t always determine success.”

When Dugas attended PBHS, she had Beth Fox, now a retired teacher, for English.

Fox said she’s seen the tweets and snaps about how hard some of the things she did in her class were, from reading journals to how she graded. However, she took that as a good thing because she’s had students come back and thank her for it later because it helped them prepare for college.

“All of the students in this room have one thing in common, they work very hard to get here,” Fox said. “They worked hard academically. Many of you work jobs, you sing in the choir, you’re in ROTC, you participate in athletics, you do all of these things and yet you still manage to have good grades. In order to do those things, you have to have a work ethic.”

Dugas was in Fox’s class the first year she was a teacher. Fox admitted to giving a lot of work then because she wasn’t completely sure how much to give. She said Dugas did a lot of work and never complained about it.

“She is a champion on the court, on the track and in the classroom,” Fox said. “Most importantly, she’s a champion in life. I say that because when someone works hard and achieves their goals, that person is winning. Soley is winning.”

Fox said Dugas is a True Mule because of her love for the school district and the town.

“To be part of the same category or even mentioned as a True Mule after the late officer Wesley (Lewis)’s passing, is a huge thrill to me,” Dugas said.

Dr. Scott Dill, superintendent, said one of the benefits of the letterman ceremony is getting people into the high school for academics.

“When you get that letter or that chevron this evening, it’s a stepping stone,” Dill said. “It signifies that you’re on your journey and you’re getting where you need to be. I can’t tell you how proud I am of the work you’re doing every single day. Some of you may know that ... once in a while I get the chance to visit with students who are having some difficulties in their lives. There are times where I forget that is a very small portion of the students that are attending our schools.”

The Academic Booster Club started in the early 1990s with a focus on providing educational opportunities for students that are outside of the regular budget, Boosters President Jerrod Murphy said. This includes providing grants to teachers, sponsoring field trips and trips to college campuses as well as sponsoring the letterman patches.

Fox, now a member of the Academic Booster Club, said this mission of helping provide opportunities to teachers and students is what got her involved with the organization.

“I think it is really beneficial to our students,” she said.