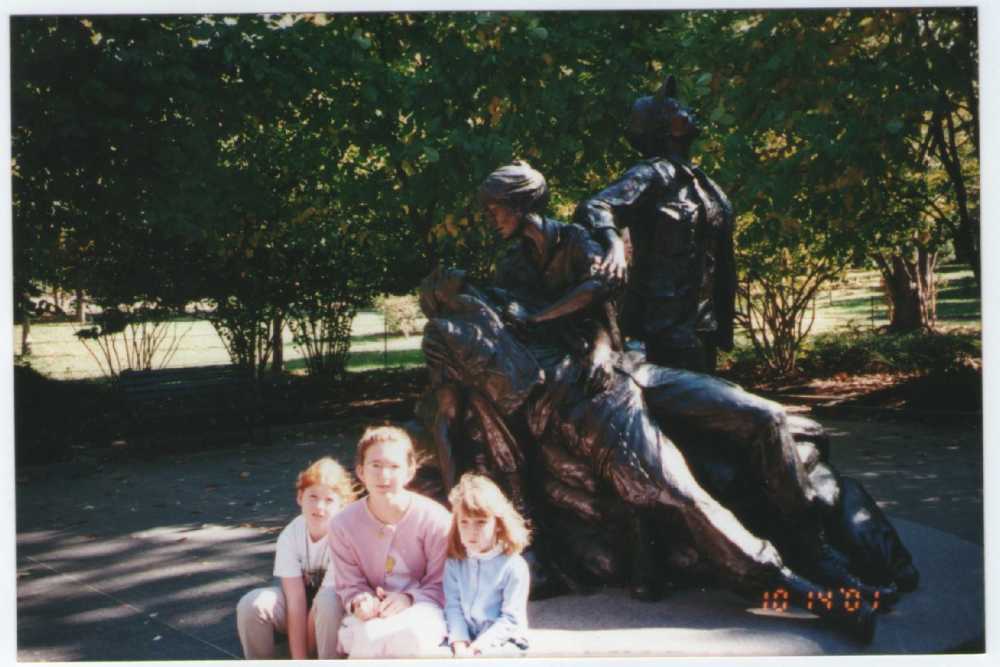 Siblings Carter, Katye and Michael Shine at The Vietnam Women's Memorial in Washington D.C. on Oct. 14, 2001.

For obvious reasons, I don’t remember anything about the attacks or the country’s response. I don’t remember the news coverage, the photos of people crying or those of ash filling the New York City skyline. What I do remember is being in Washington D.C. and not being able to do very many of the traditional activities.

In my young mind, these two events were closely linked pretty much as soon as I knew what 9/11 was. Turns out there was a little more time between the two than I thought, but they are connected.

My sisters were both very active in Girl Scouts and we went to Savannah, Georgia, with their troop. From there, the five of us continued to Washington D.C.

I remember two main things from being in D.C.

1. Going to the Washington Monument and not being able to climb it.

2. Being confused about why my dad was excited about a chair in the Smithsonian. It was Archie Bunker’s chair from All in the Family. That’s a reference I still don’t get.

When I decided to do a story about the 9/11 anniversary this week, I thought it would be good to get the full story from my dad to better understand my age-limited memories. So, here’s what we actually did.

We did go to Savannah and continued from there to D.C. It was not in the beginning of September like I thought. Rather, we went at the beginning of October for my mom’s birthday. It was a trip they’d planned before the terrorist attack and after they happened, my parents talked about not going. However, they decided to still go because “we’re not going to change the way we live our lives,” my dad said.

On our way into D.C., he was looking at the map and mentioned that we were getting near the Pentagon. When we rounded a corner, he was looking straight at not only the Pentagon, but the hole in the building from the attack. Before seeing it, he didn’t realize how big the Pentagon actually is, let alone the scale of the impact the attack had.

On our first day, we visited several of the monuments and Arlington Cemetery — which we apparently almost got locked into because my parents didn’t realize it would close.

Like I remember, we weren’t able to go into the Washington Monument, but that was due to maintenance and not a lock down from 9/11. There were other activities such as touring the White House that we weren’t able to do because they were still locked down due to panic from the attacks.

So what’s my point in all this? I think the main thing is explained by what my dad said when they were considering not going, “we’re not going to change the way we live our lives.”

It’s very easy to let attacks like the one on 9/11 or the Boston Marathon bombing in 2013 strike terror in us and make us change how we live our lives because of that terror. However, in the end, if we let these things keep us from enjoying our lives ,then the people who cause these attacks win.

More from this blogger · Michael Shine
Respond to this blog