Why is band not considered a sport? 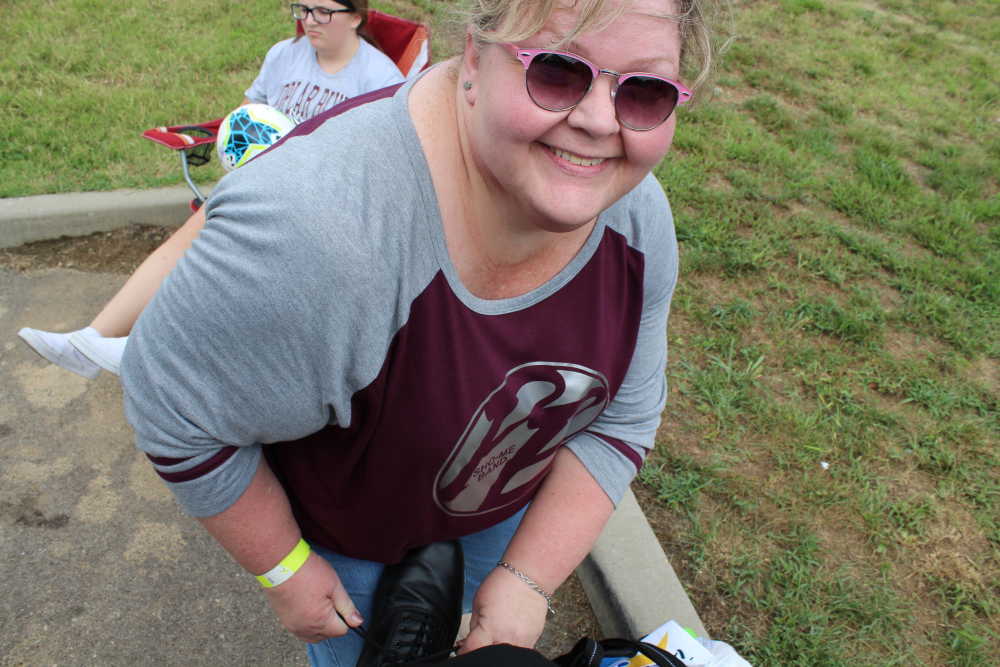 The author tying the uniform shoes of her band son, Cooper, during a recent competition.

The Oxford English Dictionary defines sport as an activity involving physical exertion and skill in which an individual or team competes against another or others for entertainment. It does not relegate sport to solely football, baseball, basketball, tennis, swimming, lacrosse, hockey, volleyball, soccer, polo, gymnastics, wrestling, golf, etc.

After watching my son participate in numerous marching competitions, during football games and marching in parades, the last two seasons as a member of the Poplar Bluff High School SHO-ME Band, I have to ask, “Why is band not considered a sport?”

Just like school sanctioned sports, band is governed by the Missouri State High School Activities Association (MSHAA) who’s mission statement does not distinguish between sports and activities. “MSHSAA promotes the value of participation, sportsmanship, team play, and personal excellence to develop citizens who make positive contributions to their community and support the democratic principles of our state and nation.”

Band parallels traditional sports in that there are regimented practices and competitions. Parents and students give up many weekends to attend various band competitions and events.

Band kids don’t get summers off either. SHO-ME Band members give up at least three straight weeks of their short summer vacations to participate in band camp. In addition, the band frequently makes appearances in various community parades and events during the summer months. Once school starts, band practice is after school until 5:15 p.m., four out of the five days in a school week.

Physical agility is a must in band. Some percussion instruments and necessary band equipment can weigh upwards of 100 or more pounds. This equipment must be moved to and fro for all performances, whether on the home football field or away at a competition. The SHO-ME Band has to rent three large box trucks just to hold all the equipment and accessories needed when they travel. Who do you think loads and unloads this equipment multiple times? The band kids of course. Band parents, volunteers and staff also lend a hand in the loading process, but overall, it’s primarily the kids.

Mental prowess is another skill band students have to master. These members not only have to load and unload heavy equipment, they have to precisely march and maneuver, sometimes in wool/polyester blend uniforms, forward and backward playing memorized music correctly, all the while holding a heavy or awkward instrument. All this magic happens within the few scant minutes a performance lasts.

I would be remiss if I didn’t mention the color guard’s importance to a band. This group works diligently to master their routines, sometimes learning several different ones a season. Color guard must contend with accouterments such as flags, mock rifles, flowing costumes and oversized field show props while precisely performing. Some color guard members also play instruments and are active members of the band, adding to their already full plates. Physical and mental agility are this group’s modus operandi too.

As is the case with their sports counterparts, band members must master their “sport”; instruments, musical skills and their abilities to march and play simultaneously.

This column is not meant as a disrespectful dirge against hardworking participants of traditional sports, just merely my attempt to bring awareness to a “sport” that often takes a back seat. I’m a band mom. I saw a T-shirt once that defined a band mom as “a nerve calming, picture taking, water providing, snack packing, shoe tying, uniform adjusting mom who unconditionally loves all band kids.” Pretty much sums it up. Go SHO-ME Band!