What are daddies made of? 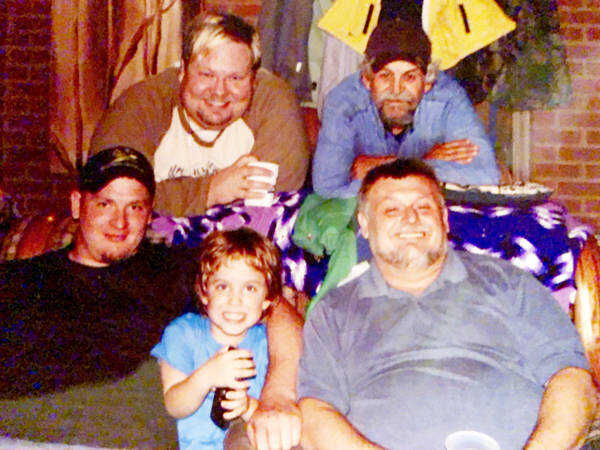 Cooper and the "boys" during Thanksgiving 2008.

My dad was a keeper. I always felt safe and protected knowing those 'Popeye' arms of his would fight the world for me and our family, if need be.

I hear his voice in my head often, especially when it comes to motors and household fix-ups… "check your oil," "don't ride your brakes," "keep an eye out on the place" and "don't be wearin' your night clothes during the day." That last one I totally disregard. Sometimes on lazy Sundays it's nearer to noon before I put regular clothes on. Don't judge, lazy days are far and few between for me anymore.

I'm certain he's eyeing me from heaven and shaking his head saying, "Baby Girl, what in the world am I gonna do with you?" I'd give my left arm just to hear him say that in person one more time. I will forever miss him.

Cooper never got to meet his 'Papa Alfred.' Daddy died nearly 11 years before Cooper was born but I know he'd be proud of my boy. I see a lot of Daddy in Cooper's way of thinking and in his fierce protective nature. DNA does have a way of rearing its head, doesn't it?

As fate would have it, Cooper grew up primarily without his biological dad being an active part of his life.

I beat myself up for years with guilt over the absence, feeling I had somehow failed as a mom in keeping our family together. I tried to be both Mom and Dad, knowing full well I could never replace a proper male role model. I gave it my best shot by teaching Cooper all the "man" stuff I knew and thought was essential.

With all I attempted, I never found absolution… until Thanksgiving 2008.

Post Thanksgiving meal that year, my oldest sister and I had finished up the dishes and joined the others in the den for our traditional family viewing of "National Lampoon's Christmas Vacation."

There on the sofa sat Cooper, nestled between his cousin, Lyndon, and his uncle, Keith, and flanked in the back by his uncles, Joe and Larry. The "boys" were all laughing and carrying on like magpies. Smiles for miles, as they say. There was my absolution.

I am eternally grateful for these four men who have filled Cooper's cup again and again over the years. You have been an integral part of his life formation and are loved unconditionally. Thank you for loving my son.

Father figures may not always be made of DNA, sometimes they're fashioned purely out of love.

Happy Father's Day to all the fathers and father figures making a difference in the life of a kid they love.

More from this blogger · Amber Hornbeck
Comments
View 2 comments
Note: The nature of the Internet makes it impractical for our staff to review every comment. Please note that those who post comments on this website may do so using a screen name, which may or may not reflect a website user's actual name. Readers should be careful not to assign comments to real people who may have names similar to screen names. Refrain from obscenity in your comments, and to keep discussions civil, don't say anything in a way your grandmother would be ashamed to read.
Respond to this blog