Dear Rodgers Theatre, thanks for the memories... 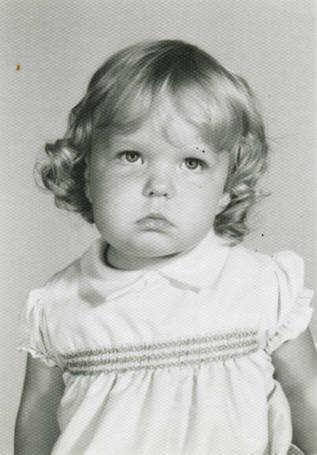 The author at age 3.

My late grandmother, Stella, often recalled what a wondrous sight it was to behold the "burning of Atlanta" scene in 1939's "Gone With The Wind" while she sat in the audience of a darkened movie theatre in Poplar Bluff. That movie was the first color film she had ever seen.

Having migrated with her family from eastern Tennessee during the early 1900s, Gran picked "Gone With The Wind" to see because she hoped it would be a fond reminder of her southern upbringing. Later, she would tell me the movie's tale of the South was "fair to middlin'" in its facts, but was truly a spectacle to see.

I don't recall what movie theater she saw it in but she said it cost extra to see the iconic film…25 cents versus the usual 10 cent "picture shows" she usually took in. Gran said it was worth "ever penny" spent.

It comes as no surprise her memories of "Gone With The Wind" inspired my obsession with the film and movie-going.

My earliest movie theater memory is because of Gran. She and my granddad, Joe, took me to see the 1971 film, "Willy Wonka and the Chocolate Factory" , starring Gene Wilder, at the Rodgers Theatre in Poplar Bluff.

I was about 3 years old then and remember the pretty ticket lady in the booth under the portico giving me a miniature "Dum Dum" sucker. I was fascinated with the "clanky" metal tray she moved back and forth to send the change, tickets and my sucker out to us. I hadn't even made it into the theater and I was already taken with the experience!

Oh those circular windows in the big walnut doors of the Rodgers! I ran my tiny hands carefully along those wooden curves and over the shiny rounds of glass repeatedly as we waited in line to enter the lobby. I can still feel how smooth those "fancy" doors felt to my little girl fingers. I think of that moment every time I enter through those iconic doors even now.

I don't remember if we got snacks or not that day, but am certain we did. Granddad would never go somewhere and not get a bite to eat, especially popcorn.

We chose seats in close view of the old round blue neon clock that used to hang on the west wall of the auditorium in anticipation of the movie starting.

My "burning of Atlanta" moment came during the scene in "Willy Wonka…" when all the children and the adults see the chocolate river for the first time. It's like the moment in the "Wizard of Oz" when the movie changes from sepia to full color… magnificent and breathtaking.

I will forever treasure that special day 48 years ago, at the "show" with my beloved grandparents and how they nurtured my ever growing love affair with the movies.

Happy 70th Birthday Rodgers Theatre! Thank you for creating a lifetime of magical movie memories for me and my family.