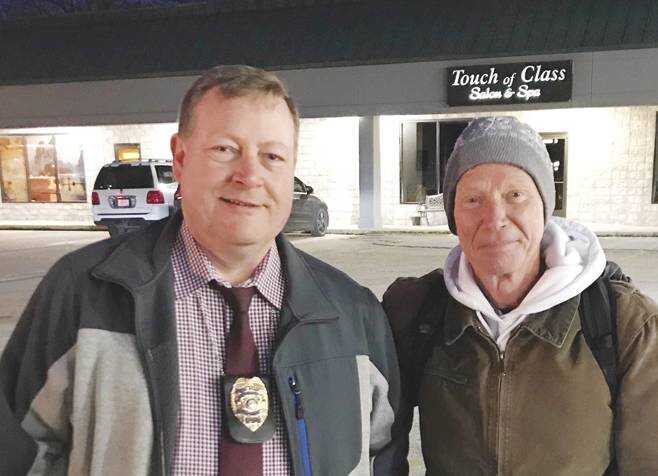 What they found instead was an inspiring story of a man walking across America, hoping to encourage others to be kinder to each other.

You can look him up under, walk across America and his name, Bracklen.

He’s at least 89 years old, and says he started his journey on the east coast, walked to the west coast, and then turned around to start again.

“It was amazing,” said officer Andy Cleaveland. “He told us that when he goes around, if he finds somebody in need, he will help them.

“He has no cellphone, no computer, and thinks his life is better for it. When he gets tired, he stops, when he gets hungry, he eats.”

It was late and officers were worried about dropping temperatures, so they helped Bracklen find a warm place to stay for the night.

He told them he expected to be up by 6 a.m. Friday morning and on the road again. He had already walked to Poplar Bluff from West Plains, and would be continuing his journey.

Even though we weren’t able to catch up with him, I still wanted to tell his story. So, this column was born, even though it wasn’t what I planned for my already busy Friday.

And stopping to help a passing stranger find a warm place to sleep probably wasn’t part of the officers’ plans for their busy night. I saw the reports from Thursday, so I know it was a very busy day.

But sometimes, we have to stop in our busy days to appreciate the people around us.

“He could stop at any time and he just keeps on going,” Cleaveland said Friday morning. “It’s very inspirational to see the dedication and fortitude to keep on going, despite all the adverse conditions and roadblocks.”

He had spent several days walking in the rain before reaching Poplar Bluff. We all know what the weather has been like recently, and how unpleasant that must be for those without a warm place to go home to at night.

Bracklen has had multiple contacts with law enforcement, but they’ve been positive, he also told officers, even collecting patches from the various departments.

He once helped deliver a baby alongside the road in Texas, has used his own money to help people he met along the way with utility and rent bills, and just keeps telling his story.

“When you have positive interactions with the public, even though it started off in a negative manner,” it helps, said Cleaveland. “This is an amazing story. It is a very welcome break from what we normally see and hear.”

What they normally see and hear includes all of the complications technology brings to our lives, as it becomes even more ingrained in every moment of our days.

Social media and text messages are some of the meanest forms of communications that exist, Cleaveland said during our conversation, adding he often reminds people not to type anything they wouldn’t say to a person’s face. It’s advice, I believe at least, that falls on deaf ears far too often.

I was out of college before cellphones became a daily part of my life. I’ll admit I was somewhat of a holdout, and still am in some ways.

It’s good to have a reminder once in a while, of what is important and what isn’t in our days.

More from this blogger · Donna Farley
Comments
View 2 comments
Note: The nature of the Internet makes it impractical for our staff to review every comment. Please note that those who post comments on this website may do so using a screen name, which may or may not reflect a website user's actual name. Readers should be careful not to assign comments to real people who may have names similar to screen names. Refrain from obscenity in your comments, and to keep discussions civil, don't say anything in a way your grandmother would be ashamed to read.
Respond to this blog