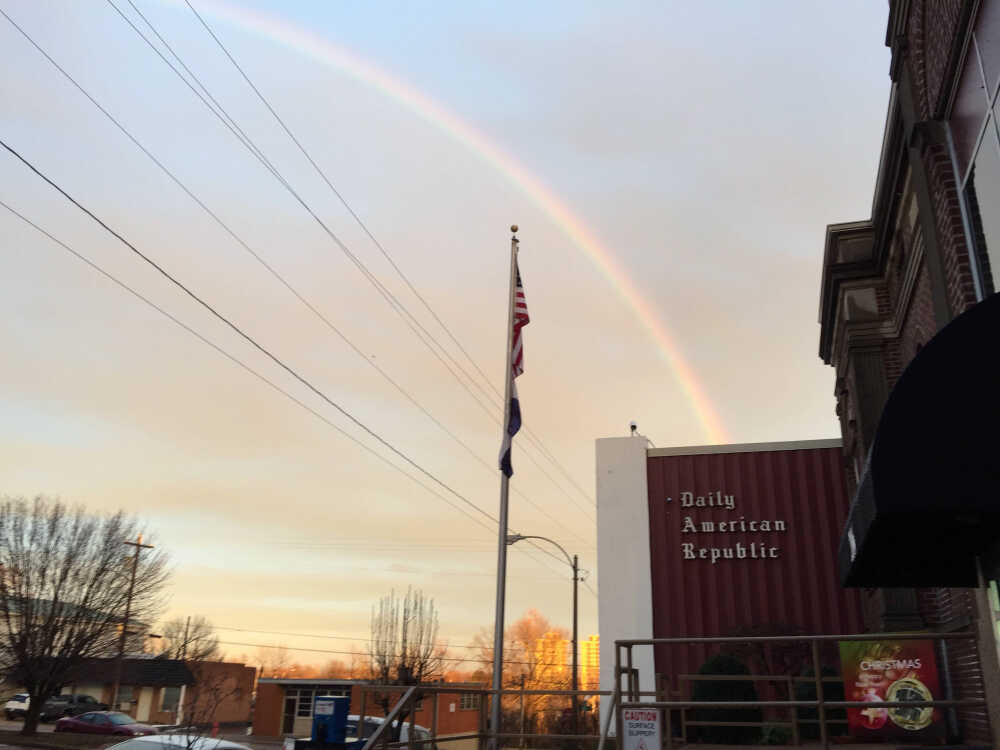 The week of New Year’s was stressful. I won’t lie.

The weeks since then haven’t been quite as stressful, but they’ve still had some fairly challenging moments.

We made major changes that impacted every department in the building, in an effort to become stronger, more efficient and provide the best and most local news coverage we can.

No desk was left untouched and that wasn’t without its hiccups, stumbles and a few slips. Which wasn’t for lack of will or effort. Many early days and late nights were put in by every department from circulation to page composition trying to put everything right, and especially our IT department.

While it wasn’t perfect by the end of the first week, we were certainly getting better.

Just before I left the Friday of that first week, several of us were discussing how long the week felt, despite the break for the New Year’s holiday.

When I went outside, there was a rainbow that appeared to end right at 208 Poplar, the home of the DAR for many decades.

I know this may sound corny. I might even be accused of being an overly optimistic person (which may seem strange for someone who covers as many city, county and government meetings in this day and age as I do).

But this isn’t the first major change this old brick building has weathered. And those weren’t without their stumbles and falls.

When a new press was installed in the early 1970s, it was calibrated incorrectly and turned the first few hundred editions printed into confetti. There was a scramble to get it fixed, phone calls to a manufacturer in Chicago and everything was eventually put right. The paper made it out that day, just as it has for more than 15,000 editions since.

When I left at the end of that first week, stepping onto the sidewalk, of course my view shifted and our big, bright rainbow had settled over the Twin Towers.

Life is all a matter of perspective. We can choose to view the good things as always out of reach, or we can to choose celebrate our wins and keep trying every day to make a little more progress.

Today, we put out a paper with more quality, trusted news, information and good stories about our communities than you will find anywhere else. I count today as a win and we’re already working on tomorrow.